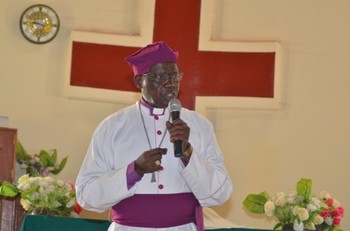 The Bishop of the Episcopal Diocese of Yei is urging South Sudan’s top leaders to instruct their ground forces across the country to respect and observe the Khartoum declaration on the cessation of hostilities agreement.

Addressing thousands of worshipers at the Emmanuel Cathedral in Yei River State on Sunday, Bishop Hillary Luate Adeba said it’s high time for the two principals to end the suffering of the South Sudanese through implementing the agreements signed.

“Our President Salva Kiir and opposition leader Riak Machar to truly and truly make sure that they begin to inform their forces on the ground that the agreement has been signed and no need for war again. Many times agreements have been signed in Addis-Ababa but down in Lasu, Ombaci, and Mukaya and all over Yei River state, the people holding guns tend to ignore and violate whatever has been signed,” he said.

“This time we call on the leaders to instruct their forces wherever they are that they should honor the agreement where their leaders appended their hands for peace,” Bishop Luate added.

In his declaration of ceasefire, President Kiir also ordered his forces to allow unhindered access of humanitarian relief convoys to their targeted destination.

The religious leader expressed optimism saying he hopes the agreement holds so that the suffering of the people of South Sudan comes to an end.

“To us it means our people will be allowed to move to the towns and to the rural areas. We also believe that there will be no gun shots, killings and displacements,” he said.