US sanctions 3 people over role in South Sudan's civil war 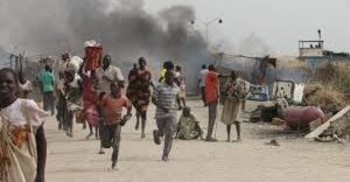 Civilians flee fighting at a United Nations base in South Sudan. (TRT WORLD)

The United States said on Friday it has sanctioned three individuals over their roles in South Sudan's civil war, including a retired Israeli major general.

According to the statement, all three sanctioned individuals profited from the conflict and that their behavior stands in direct opposition to international efforts to help the vulnerable citizens of South Sudan and establish a lasting peaceful resolution to the current conflict.

The US also designated six entities owned by Olawo and Ziv.

The US statement said Ziv, a retired Israeli Defence Forces major general, supplied arms and ammunition to both sides in the civil war. It said he used an agricultural company as a front to sell approximately $150 million worth of weapons to the government.

Vasili, according to the statement, oversaw an explosion of intra-clan ethnic violence and led a militia as governor of Gogrial state until the government removed him late last year. A special investigation carried out by Radio Tamazuj last year also found that Mr Vasili was implicated in the long running conflict between the Aguok and Apuk clans.

Olawo, the US said, routinely imported standard and armored vehicles for the government of South Sudan, and as of mid-2018 was engaged in the trade and shipment of arms.

The United States said it is committed to countering rampant corruption and serious human rights abuses in South Sudan, and applauded the efforts of local, regional, and international allies to end the conflict in South Sudan.

The United States also applauded the government of South Sudan and the opposition for progress that they have made in implementing commitments laid out in the revitalized peace deal, including the release of some political detainees and reduced levels of violence.

A recent report published by the London School of Hygiene and Tropical Medicine estimates that at least 382,900 people have died as a result of the country's five-year civil war. The sanctions were announced a day before South Sudan marks the fifth anniversary of the start of the conflict.