Skip to main content
Toggle navigation
Home News US, China at odds over sanctions as next step
New York - 3 May 2012

US, China at odds over sanctions as next step 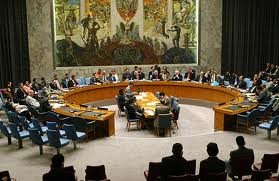 US ambassador to the UN Susan Rice said the current conflict between Sudan and South Sudan is on the brink of becoming a full-scale war presenting a clear threat to international peace and security.

Rice stressed the need for the fighting to stop immediately and said the UN Security Council will take measures based on the two parties actions, not words.

She said the members of the UNSC agree on the need for accountability of the side that fails to quickly comply with the resolution.

She added that the Council is prepared to issue sanctions under Chapter VII of the UN Charter against one or both sides as deemed necessary.

The Chinese ambassador to the UN Li Baodong said 'China stresses the need for the international community to treat Sudan and South Sudan in a balanced, neutral and objective way, to refrain from bias or pressure on both sides, and not interfere in the African Union's mediation efforts.

He said 'China was very careful of the use or threat of imposing sanctions.'

Sudan's ambassador to the UN Daffa-Alla Elhag Ali Osman expressed reservations about parts of the Resolution including the threat of sanctions.

The ambassador said Sudan has not bombed 'any territory in South Sudan, asserting the right to use all military means within Sudanese territory to repel aggression.'

He said peace will only come when 'South Sudan stops supporting and arming rebel groups against the Sudanese state.'

South Sudan welcomed the resolution and said it already withdrew its police forces from Abyei on April 28.

He stressed that Juba is committed to end hostilities and resume negotiations brokered by the African Union Committee.

Alor also appealed to the UN and its members to deliver humanitarian aid to civilians affected by the ongoing aerial bombardment by the Sudanese government which has displaced thousands from the Abyei area.