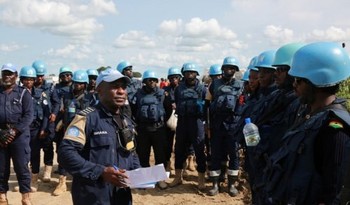 The United Nations Mission in South Sudan (UNMISS) said Saturday it has recalled a unit of Ghanaian police officers from Wau and confined them to base after a preliminary investigation into allegations of sexual exploitation.

The UNMISS said an immediate decision was made to remove the 46-member Ghanaian Formed Police Unit (FPU) from their duty stations inside the UN Protection of Civilians (PoC) site in Wau on Feb. 8, when a complaint was made.

“The unit was fully withdrawn from the Wau base to Juba over the next two days,” it said in a statement issued in Juba.

“UNMISS has a zero tolerance, no excuses, and no second chances approach to sexual exploitation and abuse,” the statement said.

“Our priority is to put the victims’ rights and dignity first and ensure that there is transparency and accountability for such actions,” the statement added.

According to the UN mission in the country, a complaint was received on Feb. 8 alleging that members of the Ghanaian police officers engaged in sexual activity with women living at the PoC site in Wau.

It pointed out that an investigation was immediately launched by the Office of Internal Oversight Services.

UNMISS said it has informed UN headquarters in New York of the allegations, which in turn notified the Member State that the matter was being investigated by the United Nations.  However, the UN Mission said there is no indication that this behavior is more widespread within the Mission.

“It is very disappointing that the behavior of some police officers risks staining the record of service as well as the Mission’s reputation,” it said.

UNMISS has some 17,000 peacekeeping personnel, including 13,000 soldiers and 1500 police, who carry out the Mission’s mandate to build durable peace and protect civilians in South Sudan.

It said any act of sexual exploitation and abuse undermines the critical work of the Mission and compromises its credibility with the people of South Sudan.“It cannot and will not be tolerated,” the UNMISS statement said.