UNMISS Chief reports some progress in South Sudan to UNSC 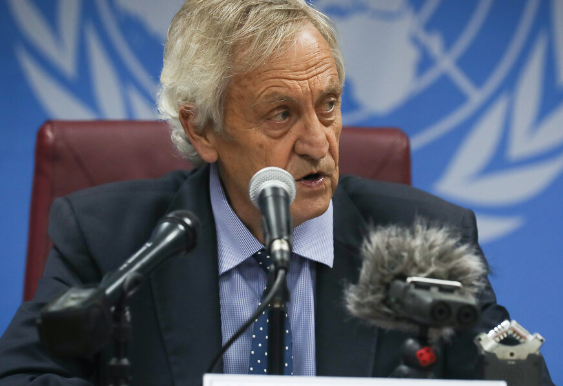 Special Representative of the Secretary-General for South Sudan and Head of UNMISS, Nicholas Haysom. (Photo: UN)

The Special Representative of the Secretary-General for South Sudan and Head of UNMISS, Nicholas Haysom, on Monday, while briefing the UN Security Council said with eight months remaining to the close of the transitional period, South Sudan has made some progress.

He said an opportunity remained for South Sudan to meet the critical benchmarks required to complete its transitional period.

“With eight months remaining, that window is closing. This notwithstanding, I report to you the following progress,” Haysom said. “After the opposition’s withdrawal from the transitional security mechanisms following a tense security environment at the end of March, the parties have been able to overcome a critical impasse to reach a breakthrough agreement on a single joint command structure for the Necessary Unified Forces on 3 April.”

He also reported that the formation of the reconstituted transitional legislature, at national and state levels, is now completed, with all speakers sworn in and heads of specialized committees appointed.

According to Haysom, with the agreement of 3 April, the South Sudanese leaders have shown that they can make real progress when there is a sense of urgency and determination. He said it is the UN’s expectation that the parties to the peace agreement will now agree on a roadmap, as jointly called for by the African Union, IGAD, RJMEC, and the UN.

“This roadmap should serve to recommit the parties to the revitalized peace agreement and must be accompanied by clear benchmarks and timelines,” he explained. It should especially address the completion of outstanding tasks, such as the graduation and deployment of the Necessary Unified Forces, the approval of pending key legislation for the constitution-making process, and national elections, as well as critical reforms of the security, judicial and financial sectors.”

In regard to the elections, Haysom said it was important to note that what is required is not only the technical arrangements and logistics but also an appropriate political environment.

“The former refers to the necessary transparency and organization for the elections to be considered manifestly a true result of the votes cast. The latter refers to the presence of political space for a robust and competitive political process, but is nonetheless a nation-building event,” he said.

Haysom said that unless the parties demonstrate a collective common purpose, there will be challenges in meeting these commitments.

According to the UNMISS chief, the scale of sub-national conflict—which now spreads from north to south and east to west—is alarming.

“In Eastern and Central Equatoria, Unity, Warrap, and Jonglei states, as well as the Abyei Administrative Area, violence has been perpetrated against civilians, fueling a cycle of cattle raiding, abductions, revenge killings, and gender-based violence, including conflict-related sexual violence,” he said. “One important building block in this regard is the support to strengthening the justice chain, and promoting accountability.”

Haysom said the country is confronting a serious humanitarian crisis.

“As humanitarian needs grow to an estimated 8.9 million people in need, resources are diminishing. Currently, only 26 percent of the $1.7 billion required for the humanitarian response plan has been received,” he said. “Amidst competing priorities, I urge the donor community not to lose sight of South Sudan and to continue its critical assistance, including to support over 2 million women and 4.6 million children.”

According to the UNMISS chief, humanitarian workers are increasingly targeted while delivering services to those in need.

“In this regard, I call on the government to guarantee the safety and security of humanitarian personnel and the population, and to bring those responsible to justice,” he said. “In view of this dramatic escalation of humanitarian needs, I must share my concern at the decision of the Ministry of Humanitarian Affairs and Disaster Management requiring humanitarians to provide documentation in addition to existing agreements.”

“Such unilateral decisions impede the ability of humanitarian partners to carry out operations that ultimately benefit the South Sudanese people,” he added. “Both I and the Humanitarian Coordinator have urged the government to review this decision as soon as possible and engage constructively with the ongoing negotiation process with the humanitarian sector.”