UN should impose sanctions on Sudan 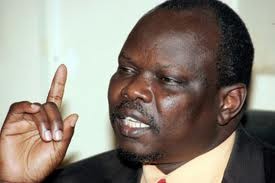 A senior South Sudanese official said on Friday that the UN should impose sanctions on Sudan force it to abide by the decision of the Security Council to end hostilities and resume negotiations on oil and border disputes.

Pagan Amum told Reuters that Khartoum has not adhered to the decision issued on May 2, giving two weeks to resume negotiations.

He said clashes at the border have intensified instead.

A spokesman for the Sudanese foreign ministry said Amum’s remarks were unfortunate and accused South Sudan of violating the Security Council resolution by continuing ‘aggression’ on Sudanese territory.