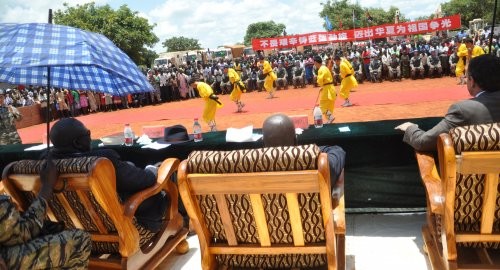 A representative of UN Secretary-General Ban Ki-Moon has told the South Sudanese Vice President Riek Machar that the country needs a national political council for demobilization of soldiers from the Sudan People’s Liberation Army (SPLA).

Toby Lanzer, Deputy Special Representative in the UN Mission in South Sudan, said that political will is needed to carry out demobilization, which is referred to by the United Nations as ‘DDR’.

In a remark addressed to the vice-president during a public address on Wednesday, the UN official said: “My final point, Mr. Vice-President, what will be in particular very important for us, is the convening of a national DDR council in Juba which will provide the political support and the strategic guidance to the whole DDR programme, not only the activities going on here in Mapel but the activities that target the entire group of perhaps 150,000 soldiers and police officers and the like.”

He was speaking at an event near the SPLA 5th division headquarters in Mapel, Western Bahr El Ghazal, marking the launch of a new training facility for retiring soldiers. The facility was built by the Chinese contingent of the UN peacekeeping mission with the assistance of a Chinese engineering company. The new facility will accept its first batch of 500 SPLA soldiers in November as part of a pilot training program.

South Sudan already has a Demobilization, Disarmament and Reintegration Commission but apparently the UN leadership does not consider it to have enough political clout.

Mr. Lanzer’s attention to the demobilization programme is among his first acts as Deputy Representative since his appointment to the position in late July. His status within the UN peacekeeping mission, as well as formal responsibility over the United Nations Development Programme in the country, give him wide discretion over interventions in both the civilian and military spheres.

The United Nations in South Sudan for years has funded a demobilization programme that has been unable to meet targets because of resistance from the South Sudanese military command. Historically, the country has not used the post-2005 peace years for downsizing the army but instead has used the bulk of its revenues to maintain its military strength. According to the SPLA White Paper of 2008, demobilization is only for soldiers who are unfit for service or of retirement age.