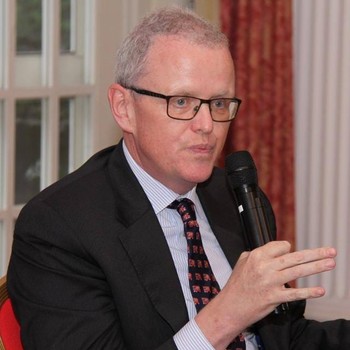 The UK special representative for Sudan and South Sudan says they are committed to supporting the implementation of the peace agreement on condition that the government and parties show commitment in the process.

In an exclusive interview with Radio Tamazuj last week, Ambassador Chris Trott said that South Sudanese leaders must demonstrate their commitment by setting aside part of their resources to fund the peace process while seeking external support.

Trott said this is one way to instill confidence on the donor community which is yet to receive any formal requests from the National Pre-Transitional Committee, the body tasked with the oversight and implementation of the activities of the pre-transitional period.

“I think what my ministers will be concerned to see is that the requests from the committee are realistic, and that there is a commitment of South Sudanese resources in every request. So it’s not just a request to the international community you need to pay this amount for x but rather it comes out as we are going to put this amount of our oil revenue in, can you do this. Because what we want to see and what we feel strongly is that would then demonstrate that this time it would be different from last time,” he said.

“We know the price of oil is going up, we know that the amount of oil being pumped is going up, so we know that the resources available in South Sudan are also going up. So what we want to see is those resources being used on the implementation of the peace agreement because that would give us the confidence to use our own resources on the implementation of the agreement because that would be a demonstration of commitment,” he added.

Ambassador Trott said although they await requests and commitment from the parties, the UK and the US remain the two large bilateral donors in South Sudan. He further dismissed any suggestions that they are not supporting the peace process in South Sudan as baseless.

“We are still the two members of the Troika, your largest and your second largest bilateral donors. So any suggestion that we are not committed to supporting the people of South Sudan is pure nonsense. We are all supporting the institutions of the peace process, JMEC, CTSAMM and that support continues. There is an absolute commitment.

Trott further revealed that the continued fighting in parts of the country, lack of humanitarian access and continued detention of prisoners of war is detrimental to the peace process. He called on the parties to the agreement to adhere to the dictates of the agreement for smooth implementation.

“Our request to those that have signed is that the door should remain open for others to come on board. And that rather than seeking to defeat them in a battlefield they engage in a dialogue to try and convince them to be part of this agreement,” Trott said.

He, however, cautioned those parties that signed the Cessation of Hostilities agreement in Khartoum, saying they will be held responsible for violating the ceasefire agreement even though they did not sign the final agreement.