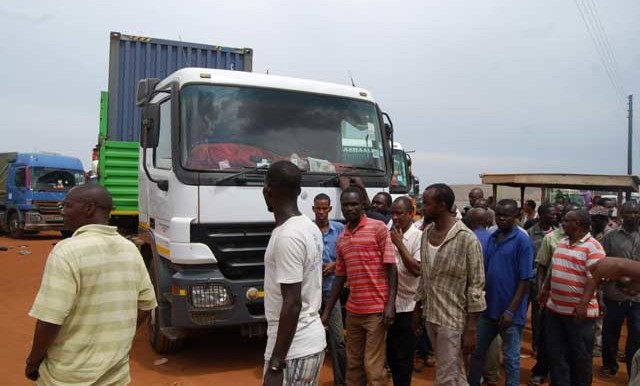 Ugandan truck drivers destined for South Sudan have parked their trucks at the Elegu border town in protest of the recent highway killings, as they demanded security guarantees from the South Sudanese government.

This followed shortly after South Sudanese authorities handed over the bodies of four Ugandan drivers who were killed in Lainya County along the Yei-Juba road last week. In another incident, two people were killed and trucks burned along the Juba-Nimule road late last week.

Zansa Moses, the chairperson of the Ugandan community in Eastern Equatoria State told Radio Tamazuj that the Ugandan traders demand security escorts for them to resume their businesses.

“It has been like three days or four days back when the drivers were attacked along the Juba Nimule highway. It is a strike that they want the government of South Sudan to provide them with security such that they move comfortably, give them maybe the patrol, security to escort them from Nimule up to Juba, that is the fear they have," he said.

Moses announced the strike will continue until authorities address the security concerns along the major highway.

Captain David Khasmiro, the Inspector of Police in Nimule town confirmed that the strike has been ongoing since Saturday.

“They are striking due to the recent incident along the highway that is why they say they now have no security in the country. But the vehicles that carry perishable goods like tomatoes are moving one by one. The strike has gone on for three days from Saturday up to now,” Khasmiro confirmed.

The Juba-Nimule road is the main import route for goods and services from Uganda and Kenya into landlocked South Sudan.

“There will be a huge impact from this strike. Some traders will hike the prices of goods for things like building items and flour. There is a negotiation at the national level and it will be addressed soon,” he added.

“The best way forward is to establish an escort convoy from Juba to Nimule when the trucks take off and then when they return from Nimule to Juba as well as in the Yei road," he said. "I think this will be the strategic measures that will be taken as you know our land is landlocked and we are depending on Mombasa and those of Uganda for our daily sustainability. So it is a serious issue and it is being addressed,” he assured.

South Sudan Inspector General of Police General Majak Akech said the issue is being handled and the standoff will soon be resolved.

In a statement last Friday, the South Sudan Ministry of Foreign Affairs and International Cooperation condemned the attacks.

“We believe that pockets of rebel groups who are opposed to the implementation of the Revitalised Agreement on the Resolution of the Conflict in South Sudan are behind these unnecessary deadly attacks. South Sudan is always indebted to Uganda and \Kenya for their un-wavering demonstration of solidarity with the people of South Sudan," the statement read in part.

The government further said it would work with Uganda and Kenya to address the atrocities.

But the holdout opposition group, the National Salvation Front, has distanced itself from the attacks and instead blamed government soldiers.