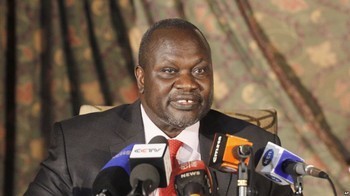 In May, three factions of South Sudan's SPLM party agreed in in Kampala to set aside their differences and work out a roadmap to reunify the party, but the main armed opposition faction loyal to Riek Machar didn’t attend the meeting.

“Your representatives are hereby invited to attend so that mediation process is all inclusive. Eventually, you could come in person after we harmonize in the region,” said Museveni in a letter dated 26 June.

“I have met the different representative of SPLM factions. During the last meeting, it was agreed that all SPLM factions be represented in the subsequent meetings,” Museveni added.

Last Month, Ugandan president invited Machar to come but Machar wrote back that hes under house arrest and cannot leave South Africa. So far, in the second invitation, Machar is yet to confirm whether he will be allowed to leave South Africa.

Last month, Riek Machar decided not to take up an invitation from Uganda’s president Yoweri Moseveni to attend a consultative meeting for factions of the SPLM party because of his forced detention in South Africa.