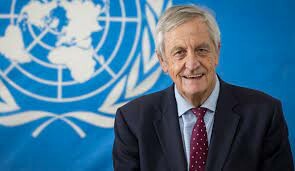 UN Special Representative of the Secretary-General, and head of the UN Mission in South Sudan (UNMISS), Nicholas Haysom. [Photo: UN]

The Special Representative of the Secretary-General of the UN, who also doubles as the head of the UN Mission in South Sudan (UNMISS), Nicholas Haysom, Tuesday told the governors’ forum underway in Juba that trust will be essential in forging a united front for national stability in the country.

The fifth governors’ forum is organized under the theme; “Role of the States and Special Administrative Areas in the implementation of the Revitalized Peace Agreement for a peaceful, stable and prosperous South Sudan”.

“South Sudan lies at the cusp of a breakthrough: to becoming a peaceful, stable, and prosperous country for the first time since its independence. But the memory and trauma of conflict run deep,” UNMISS’ Haysom said. “Trust therefore will be essential in forging a united front for national stability. It is the foundation for reimagining an inclusive social contract, by which people can live together in harmony. Where institutions lack sufficient trust, citizens may not cooperate.”

He added: “But where trust exists, governments and citizens can engage together on a shared agenda. I acknowledge that effective political systems are not achieved overnight. This depends on the sustained and collective will of leaders from all sides. I am confident this Forum will be another step towards the national effort to end decades of suffering of the people of South Sudan.”

“Furthermore, the permanent constitution-making process is in progress. Now, the people and leaders of South Sudan can come together to agree on a legitimate, popular, and inclusive system of constitutional governance that is best suited for this country,” Haysom said. “I strongly encourage you to see the constitution-making and upcoming electoral processes as important benchmarks in the march towards peace and stability. A sense of urgency is required, not a business-as-usual approach.”

He advised that while the parties have coalesced around political power-sharing benchmarks, it is equally important that they strive to make progress on the Transitional Security Arrangements.

“There is now a collective duty to finalize a coherent command and control structure for the graduation and deployment of the Necessary Unified Forces. The formation of the unified forces is only an initial step in a complex but essential process of constructing a national army that serves the interests of the nation—one that is a symbol and mirror of all its people,” Haysom advised.

He highlighted the critical role of youth in contributing to all these processes because it is estimated that over 70 percent of the population is under 30.

“The peace agreement calls on the Revitalized Government to consult youth groups and to ensure that youth representatives participate in the constitution-making and peace implementation processes,” Haysom said. “Their voices and demands—for livelihoods, jobs, and education—must be heard so that they too can be positive agents of change.”

The UN chief said it was encouraging to witness the appointed officials of the state governments putting aside their differences to objectively assess their priorities and responsibilities to advance the implementation of the peace agreement and the development priorities of South Sudan.