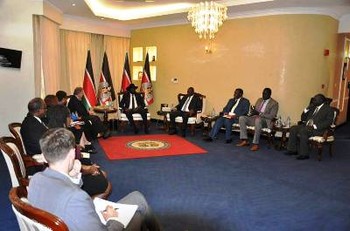 File photo: Members of the US delegation meet with President Kiir in Juba, June 1, 2017.

President Donald Trump's administration has vowed to continue supporting South Sudan if warring parties stop the ongoing conflict that has killed thousands of people and displaced millions, a delegation of the US legislators said.

During a meeting with President Kiir on Thursday, the US lawmakers led by Christopher H. Smith, who is a member of Subcommittee on Africa Affairs in the US House of Representatives, emphasized the importance of peace and stability in the world’s youngest nation.

The delegation further said Trump's administration wants South Sudan to realize peace in order to receive support. “Why should you give money to a country that is constantly in conflict and has a man-made famine is just unacceptable,” a member of the US delegation, Karen Bass told reporters in Juba on Thursday.

The US delegation appealed to President Kiir to involvement Christian leaders in the national dialogue process.

The head of the US delegation pointed out that the American people are supporting the people of South Sudan, saying they want South Sudan to succeed and be a prosperous nation.

For its part, South Sudan’s government has reaffirmed commitment to allowing free humanitarian access in the country.

"The government of South Sudan has committed itself to grand a free movement of the non-governmental organisations in order to assist those who are in need of humanitarian assistance", South Sudan’s cabinet affairs minister, Martin Elia Lomuro said.