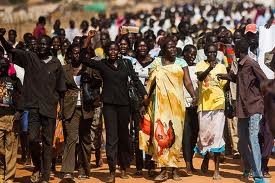 Thousands of citizens in Abyei protested yesterday against the deteriorating security situation following the withdrawal of the South Sudanese police from the area.

The protestors demanded the withdrawal of Sudanese troops from the area as stipulated in the UN Security Council resolution calling for both sides to withdraw.

They called for the South Sudanese police to re-enter the region to protect them.

The march was organised by the head of civil society organisations in Abyei with students, unions and artists taking part.

The protesters marked the fourth anniversary of the Sudanese army's occupation of Abyei in May 2008, and in May last year.

The head of Abyei civil society said the march moved to the administrative centre where a memorandum was handed to the UN Security Council via the commander of the UN peacekeeping mission calling for the Sudanese army to withdraw.