'Talks with holdout groups to resume in June' -Sant'Egidio 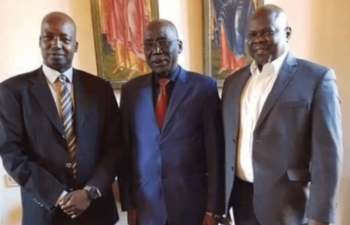 The secretary-general of the Community of Sant'Egidio, Paolo Impagliazzo says talks between the South Sudan government and holdout opposition parties will resume in June in Rome, Italy, though specific dates are yet to be set.

Speaking to Radio Tamazuj this week, Impagliazzo said talks with the South Sudan Opposition Movements Alliance (SSOMA) led by Gen. Thomas Cirillo scheduled for early this month were postponed following the death of the rebel General Abraham Wani and other security concerns.

"That is why we are still in discussion with the representatives of SSOMA to set up a new date for the dialogue. Of course security concerns but also the discuss outstanding issues on the declaration of principles that the government of South Sudan and SSOMA discussed last December. We have to take some steps forward to achieve the declaration of principles," he said.

The Community of Sant'Egidio is also mediating talks between the government and SSOMA faction led by General Paul Malong and Pagan Amum.

"Yes, we are planning to go ahead also with Paul Malong and Pagan Amum’s groups. You know they reached this declaration of principles together with the government which is an important achievement, to pave the way for the discussion of the root causes of the conflict. Soon we will have another meeting with these groups. The meeting [could be] in June or July but hopefully before the 10th anniversary of the independence day of South Sudan," he noted.

Asked whether as mediators, Sant'Egidio would unify the two SSOMA factions, Impagliazzo said: "I don’t think they will reunite but probably discussed with the government at the same table but it is up to them. Unfortunately, they divided because of some political differences. Sant'Egidio was not supposed to mediate between the SSOMA groups, we were supposed to mediate between the government of South Sudan and SSOMA and unfortunately, the division affected the talks. Hopefully, we will have a common discussion, but to reunify the group is a bit difficult from our point of view."

According to him, until the two groups resolve their political differences, reuniting them would be an uphill task.

He is optimistic that a declaration of principles agreement will soon be reached with the SSOMA-Cirilo group before they proceed to discussions on the root causes of the conflict.

However, he says, their main agenda now is to ensure that the parties adhere to the ceasefire agreement and reduce violence especially in parts of Central Equatoria State.

"But I think the most important thing for everybody is to achieve a ceasefire and to reduce the violence. This is something that we need to achieve all together, especially in Central Equatoria focusing on the Thomas Cyrillo group," Impagliazzo said. "This is the first goal we have to look for. The reduction of violence is important to rebuild the trust and start a political dialogue again."

He says the coronavirus pandemic has also affected the implementation of the ceasefire agreement, the inclusion of SSOMA representatives in the CTSAMMVM, and the political talks.

"I call on the leadership to recommit to the political dialogue and to stop the violence all over the country. This is what we believe is very important. And we believe also that, stabilizing the country the hope of Pope Francis and the Archbishop of Canterbury will soon happen," he said.

Talks between gov't and SSOMA-Malong to resume early July

SSOMA boycotts Rome talks due to killing of rebel commander