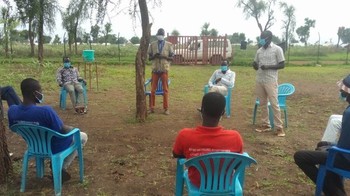 The coronavirus pandemic has brought a lot of surprises for students. Schools are closed, exams schedules have changed, and graduation ceremonies are on hold.

Sudanese refugee and DAFI scholar, Emad, didn’t expect to teach classes back in his refugee camp instead of starting his final year of university.

Emad arrived in South Sudan in 2012 in what he calls his “long walk to safety” - a month-long journey on foot to flee the conflict in his home of Blue Nile State. After being registered by UNHCR, he moved to one of Maban County’s refugee camps, which today is home to approximately 150,000 refugees.

Having completed his own secondary education, Emad was among the few who could ‘teach’ jumping at the chance to contribute, he taught science, social studies and mathematics in three refugee primary schools.

The experience lit a fire within him to pursue further study in education, and when Emad saw an advert in 2016 for UNHCR’s DAFI scholarship, it seemed like the perfect fit. After a first unsuccessful application, he received an offer to study education at St. Mary’s College in Juba.

The DAFI programme, also known as the Albert Einstein German Academic Refugee Initiative, aims to support refugees, through scholarships, to study at universities and colleges in their countries of asylum. In 2019, 90 refugees in South Sudan and 1,130 South Sudanese refugees in neighbouring countries were part of the program.

“The German government wants to give a chance to refugees to build up their future. DAFI support helps young students to afford higher education,” said Manuel Müller, German Ambassador to South Sudan.

The aim is not only to form future professionals, but also champions of education. And this is who Emad has become. During his school break earlier this year, he and other DAFI scholars spearheaded a door-to-door campaign, in his refugee camps. They encouraged dropouts to return to school and raised awareness on the importance of education in the camp’s four primary schools. With support from the local parent-teacher associations, the campaign saw a 30 percent increase in the daily attendance of students. But then COVID-19 struck.

With the schools closed as a preventative measure, Emad and his DAFI scholar group quickly teamed up with other young people in his refugee camp to spearhead an awareness campaign on COVID-19 prevention, together with UNHCR partner Save the Children International.

The two-pronged campaign conveys prevention messages – such as hand washing and physical distancing in busy places – through the public announcement system in the refugee camp, and organizes workshops with influential refugee youths, who then turn roll out the sensitization to their wider groups.

“I have become an advocate of education as well as COVID-19 prevention and awareness in the camp – and I am proud of it,” Emad says, smiling. He expects to graduate in 2021, though the exact date of his graduation is uncertain.