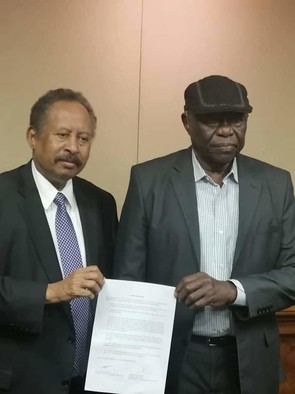 The agreement was signed by Sudanese Prime Minister Abdalla Hamdok and Abdul-Aziz Adam Al-Hilu, leader of a faction of the Sudan People's Liberation Movement-North.

In a joint statement on Friday, the parties affirmed the need to recognize and accommodate the different racial, ethnic, religious, and cultural diversities in the country.

“A democratic state must be established in Sudan. For Sudan to become a democratic country where the rights of all citizens are enshrined, the constitution should be based on the principle of ‘separation of religion and state’ in the absence of which the right to self-determination must be respected. Freedom of belief and worship and religious practice shall be granted in full to all Sudanese citizens state shall not establish an official religion. No citizen shall be discriminated against based on their religion,” the statement reads in part.

The parties also agreed that the people of the Nuba Mountains and Blue Nile will retain the status quo which includes self-protection until security arrangements are agreed upon by the parties to the conflict and until ‘separation between religion and state’ is actualized.

They also agreed to cease hostilities throughout the peace process until security arrangements are agreed upon.

The declaration stipulated recognition of the principle of the appropriate and equitable sharing of wealth and power among the various peoples of Sudan through the constitution.

This comes barely a week since the Sudanese government and the rebel alliance Sudanese Revolutionary Front signed a peace agreement in Juba, South Sudan.

On August 20, the SPLM-N faction led by General Abdel-Aziz Adam al-Hilu pulled out of the talks with the Sudanese government team, in protest against the chairmanship by Lt. Gen. Mohamed Hamadan Daglo ‘Hemeti’, who is Deputy Chairman of the Transitional Sovereign Council and Commander of the paramilitary Rapid Support Forces (RSF).

Analysts say the Sudanese agreement is a positive step forward