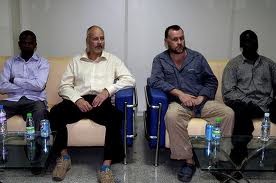 Sudan has released the four foreign workers detained in Heglig, the disputed border area near South Sudan, by the army at the end of last month.

Sudanese defence minister Abdel Rahim Muhammed Hussein said 'we released them and handed them over to the African Union meditator president Thabo Mbek.

Last month Sudan said it arrested a British national, a Norwegian, a South African and a South Sudanese national, accusing them of working for South Sudan to undermine Sudan's sovereignty.

It was later reported that they were working to remove landmines with the UN.