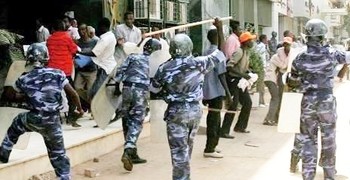 At least 19 civilians, including two members of the security forces have been killed in protests over rising food prices, the Sudanese government said Thursday.

Sudanese authorities had previously said that eight people have been killed in clashes in since the protests began on 19 December.

He added 219 civilians were wounded in the protests.

Aror, who is also the minister of information, claimed that the government has arrested several people for collaborating with rebel groups to carry out acts of violence and sabotage in the country.

The Sudanese Journalists' Network said its members have started a strike in solidarity with protesters.

In a statement Thursday, the independent body said the three-day strike is also a protest against censorship of news outlets by authorities.

Sudanese doctors have already been on a strike since Monday.

Sudan's Bashir hints at possibility of stepping down for military

Troika urges Sudan not to use force against protesters