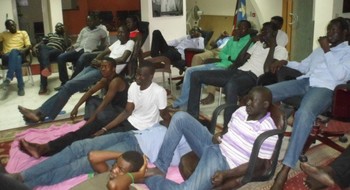 Students participating in the sit-in at the embassy said they have suffered shortages of food. They are demanding the South Sudanese government to pay them tuition fees and living expenses.

Santino Wol Majok, one of the student leaders told Radio Tamazuj that the students expelled from universities “are now sleeping inside the embassy premise and their life is so bad.”

“We are in a bad situation due to lack of food. We are now sleeping on the floor in the embassy kitchen,” he added.

The complaining student pointed out that the government of South Sudan “has failed so far to respond positively to their demands. He urged the ministry of higher education to come to Harare and sign an agreement with the government of Zimbabwe to solve their problem.

“Now we are living inside the embassy because we have nowhere to go. We will be allowed to go back to the universities when our government pays the money,” he said.

The minister of higher education Yiel Oral Lam could not immediately be reached for comment.

South Sudan has been experiencing serious economic challenges, which are mostly attributed to the ongoing civil war that has disrupted oil production.

Govt promises payment of tuition fees for students in Zimbabwe