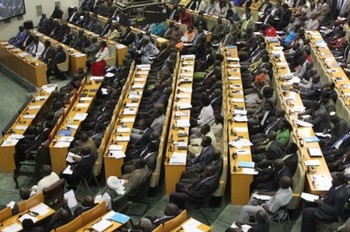 Their victory was ensured as they were lone female candidates for the post.

Voting for male contestants from different political parties including independent candidates was adjourned until Thursday in parliament for the country’s representatives to the East African Legislative Assembly.

A total of 26 names have been presented to the MPs out of whom only six will be picked tomorrow after three female MPs had already been elected unopposed.

Majority of the contestants are from the ruling SPLM party loyal to President Kiir.

Speaking to reporters after the sitting, Philip Jiben Ogal, deputy head of the parliamentary committee for information said voting will take place on Thursday after the contestants had been given a chance for campaigning at the parliament.

In June, South Sudan’s parliament revoked the nomination of its nine legislators nominated by President Kiir to the East African Legislative Assembly (EALA) after court in Tanzania put an injunction on their swearing-in due to irregularities in their nomination process.

Reportedly, President Kiir just hand-picked EALA MPs by himself through a presidential decree then sent them for approval by the national parliament in March.