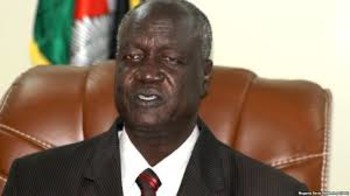 South Sudan’s Defense Minister Kuol Manyang said the successful amendment and implementation of the legal regulatory framework for the security sector will add credence to the broader call for reforms within security forces in the country.

Speaking on Thursday at the Royal Palace Hotel where stakeholders held a meeting to review and amend Police Service Act, 2009, Prisons Service Act, 2011, Wildlife Act, 2009 and National Security Service Act, 2015 as required by the peace deal, Kuol said the parties to the agreement should exert efforts to expedite the process.

“The review of the entire documents related to the security sector is the utmost priority and this is because there is urgent need to accelerate and ratify all the amendments and make them fundamental laws,” he said.

He emphasized the need to transform the security forces into professional and discipline forces in South Sudan.

For his part, Augostino S.K. Njoroge, JMEC deputy chairperson explained that the committee has adopted consultations with all stakeholders including security
institutions.

He reiterated that the committee is done with constitutional amendments, Political Parties Act and Elections Act. “As you are aware NCAC (National Constitutional Amendment Committee) is mandated to draft amendments to the security laws including the SPLA Act, Police Act, National security Act, Prison Act, and Wildlife Act to confirm them into the agreement,” Njoroge said.

“The committee will therefore consider your input and where necessary revises the proposed amendments before it corporate them into draft bills to be presented to the minister of justice and constitutional affairs for onward transmission to the council of ministers and transitional legislative assembly for enactment as required by the peace agreement”, he added.