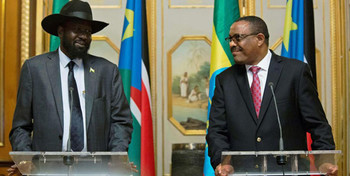 South Sudan’s cabinet on Friday approved a military cooperation deal signed with neighbouring Ethiopia, saying the defense pact will be developed into a series of agreements between the two countries.

“It is an agreement or a Memorandum of Understanding (MOU) which will be developed into a series of agreements between the two ministries of defense for corporation in all aspects of defense, Information Minister, Michael Makuei said after the cabinet meeting.

The deal signed at the presidential palace in Juba called on Ethiopia not to support armed groups, probably targeting members of the opposition under the leadership of the former First Vice President, Riek Machar.

Ethiopia led the mediation of the peace process between Kiir and Machar which was signed in August 2015, but its implementation was disrupted by the resumption of war between the two groups in July 2016 in the capital Juba.