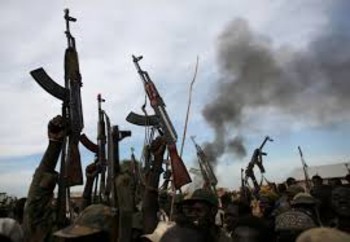 File photo: Rebel fighters hold up their rifles as they walk in front of a bushfire in a rebel-controlled territory in Upper Nile State, February 13, 2014. (REUTERS)

He admitted that three soldiers were killed and five others were wounded from their side.