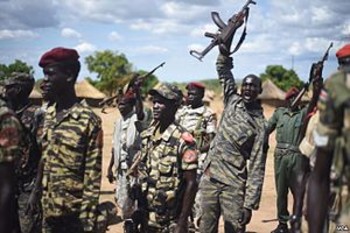 SPLA-IO deputy military spokesperson, Lam Paul Gabriel, told to Radio Tamazuj on Monday that their forces clashed with the government forces at Lanyi and that they were able to take full control of the area.

In a separate statement extended to Radio Tamazuj, the SPLA-IO deputy chief of staff for training, Lt. Gen. Wesley Welebe Samson, said their forces under the command of Major General Emmanuel Yangu attacked Lanyi garrison and after heavy fighting that continued for two hours.

“Lanyi  fell into the hands  of gallant SPLA/M IO  forces and  eight of their  soldiers  has been killed, huge quantity of arms and ammunition  captured in good condition, one military  truck and one 14.5 totally destroyed,” partly reads the statement.

The rebel deputy chief of staff for training congratulated the gallant rebels and their commander for capturing the SPLA garrison.