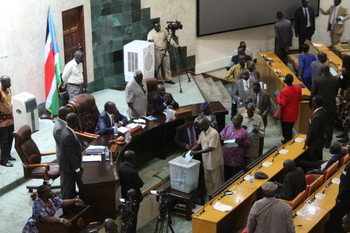 The race for the East African Legislative Assembly was concluded on Thursday night with nine members elected to represent South Sudan.

The Speaker of Parliament Anthony Lino Makana announced the nine winners out of the 29 candidates who contested.

284 of 400 MPs voted in today’s elections with two invalid votes.

The nine candidates have been elected from a list of nominees presented to parliament by political parties and special interest groups to serve at the Arusha-based assembly for the next five years.