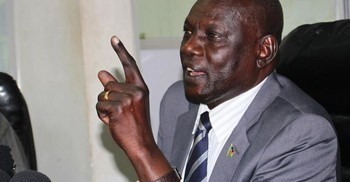 South Sudan’s government has criticized efforts by the international community to push for the formation of hybrid court.

“There are people pressing for it, especially the Troika because they have not abandoned the policy of regime change,” Information Minister Michael Makuei said at a press conference in Juba on Monday.

Makuei said the three countries are trying to selectively target South Sudan politicians through the hybrid court. “After having found that all these have failed, they came up with the idea of the hybrid court,” he said.

“The hybrid court is an instrument that they want to use against the leadership of South Sudan because the agreement gives hybrid court the right to indict anyone at any time,” he added.

Makuei, who is also the government spokesman, said:” Unfortunately, the opposition failed to understand that this hybrid court is a double-edged sword. They think that it is the government only that will be indicted. We told them that it will start with you, it is inclusive”.

“Of course people are pressing because they think it is the government that will be indicted by the hybrid court. We will see who will be indicted first, but we are all going,” he concluded.

Last month, the United States called on the government of South Sudan to move promptly to take the next steps necessary to ensure the court becomes operational.