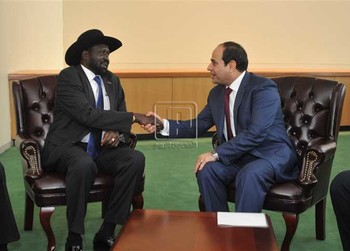 In a press conference after their meeting in Cairo, Sisi said they also discussed the momentum that both counties’ relations gained in the past period across different fields of cooperation.

“We followed the outcome of the first round of the Joint Higher Committee that convened in Cairo in July 2021 and the opportunities it brought for coordination and consultation,” Sisi said during the press conference.

According to CGTN, Sisi also said they agreed on the importance of giving new impetus to bilateral ties to expand to broader horizons of cooperation by increasing the rate of trade between the two countries, growing Egyptian investments in South Sudan, and easing access to Egyptian exports.

On the peace agreement, Sisi reiterated Egypt's support to promote peace, stability, and development in South Sudan including Cairo's support to efforts exerted by various parties to implement the transitional period’s milestones, per the 2018peace deal.

“We also exchanged views on a multitude of current regional and international issues of mutual interest, primarily ongoing developments in the East Africa region and the Horn of Africa, and ways to contain their possible repercussions on the rest of the region’s countries,” the Egyptian president said.

The talks also touched on various aspects pertinent to Nile water issues, the ongoing coordination between the two countries in this regard, and current developments of the Grand Ethiopian Renaissance Dam (GERD) dossier.