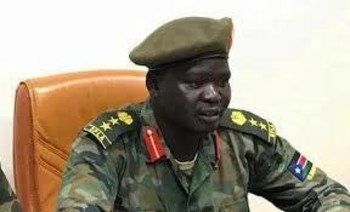 A South Sudanese military officer has resigned, citing discontent with government policies, according to a letter seen by Radio Tamazuj on Sunday.

Colonel Dickson Gatluak Jock, who was previously aligned to the country’s first vice president Taban Deng Gai, said he resigned over what he called non-procedural integration of their SPLA-IO faction into the army.

Dickson is the first army officer to resign in protest since First Vice President Taban Deng Gai dissolved his faction and joined the ranks of the SPLM party led by President Salva Kiir in March.

In the statement, Dickson said “transitional security arrangements stipulated in the 2015 peace deal were not implemented fully”.

Dickson called for the establishment of a new organisation to challenge President Salva Kiir’s SPLM party and steer the country to federalism, accusing the current government of looting the country’s resources.

It remains unclear whether Dickson would join rebel groups who are not signatories to the September peace deal to fight the government militarily or would challenge it politically.

Dickson had served as military spokesman of the defunct SPLA-IO faction in Juba.

Army spokesman Lul Ruai Koang could not immediately be reached for comment.