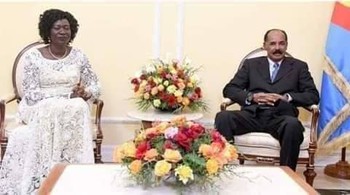 On Monday, NSS arrested Emmanuel Monychol after starting a discussion over the appropriateness of the South Sudan’s foreign affairs minister’s dressing while on an official trip.

Last week, minister Awut Deng Achuil appeared in a photo with Eritrean President Isaias Afewerki, dressed in a white dress with many critics describing it as a violation to the diplomatic code.

Monychol’s relative who spoke on condition of anonymity for security reasons, said the journalist had been released on bail to attend to family matters.

According to the relative, Monychol has been entangled in a court case since 2017 with the minister over a publication relating to her constituency.