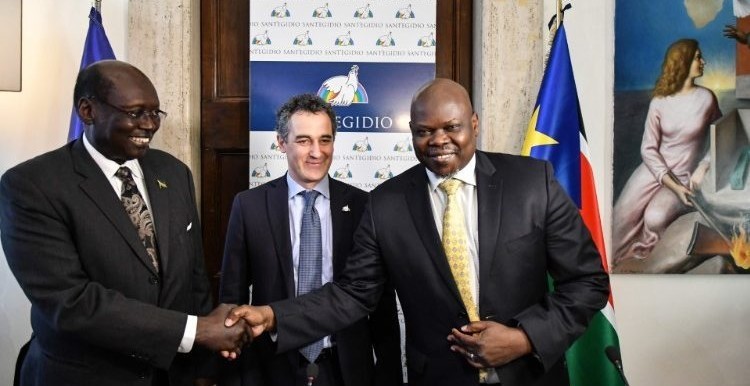 The ongoing Rome talks mediated by the Community Sant’Egidio have resolved to include the SSOMA faction led by Pagan Amum and General Paul Malong in the Ceasefire & Transitional Security Arrangements Monitoring & Verification Mechanism (CTSAMVM).

Speaking to Radio Tamazuj Monday, the secretary-general of the Community of Sant'Egidio, Paolo Impagliazzo, said that the parties held fruitful discussions and that two documents were signed.

“We organized this round of talks with the SSOMA faction headed by Paul Malong and Pagan Amum and the government. These days in Rome, we had a fruitful discussion and signed two documents,” Impagliazzo explained. “The first one is for the full inclusion of SSOMA (Real SPLM and SSUF) into the CTSAMVM. It is a road map for their full inclusion, including the establishment of a channel of communication.”

He added, “We also set the date for the technical workshop that CTSAMVM will organize for these two parties. And then we also planned and signed the possibility of a training course for the SSOMA representatives that will be deployed on the ground, part of the CTSAMM structures. So we had important follow up on what we discussed in Naivasha.”

Impagliazzo said the talks also discussed a political road map to discuss the root causes of the conflict in South Sudan.

“The second document is more political. It is a political road map to discuss the root causes of the conflict. This road map includes three meetings and it will be held in Rome in September, October, and November during which, the parties will discuss extensively some issues like the security sector reforms, governance, transitional justice, and also the possibility of how to organize the election and so forth,” Impagliazzo said.

He said that at the end of the discussion on root causes, the parties committed to signing a comprehensive agreement.

He said Sant’Egidio is also continuing to engage the SSOMA faction led by Gen. Thomas Cirillo and working to address their security concerns.

“What we need is also to continue to engage with SSOMA Cirillo, and as we have already discussed, we are working on the security concerns that SSOMA Cirillo raised about their representative residing in the neighbouring countries,” Impagliazzo said. “We are working with Kenya, Sudan, Uganda, and South Sudan to have some guarantees for the SSOMA members participating in the Rome initiative. And hopefully, we will soon resume the talks with SSOMA Cirillo.”