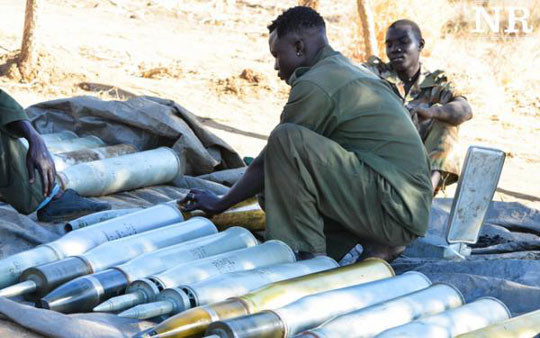 The arms used by the rebels of the SPLM-North in Sudan can mainly be traced as originating from the Sudan Armed Forces rather than being supplied by the SPLA army of South Sudan. The weapons were captured in battles between the troops of SPLM-North and the Khartoum army. This was concluded by the Small Arms Survey after conducting research in SPLM-N controlled positions in South Kordofan (in May 2012) and Blue Nile (in November and December 2012).

Independent researchers carried out physical inspections of military equipment stockpiles in the armed movement’s custody. In a report published last week, it states that since the South Kordofan conflict began, analysis of SPLM-N stocks by the Small Arms Survey indicates that the 1st Division has captured significant volumes of material from the SAF, especially ammunition, reducing its dependence on supplies originating from outside Sudan. Conversely, the SPLM-N 2nd Division (Blue Nile) has seized only limited volumes of arms and ammunition because it has had few military engagements with SAF.

Based on these investigations, the SAF appears to be the primary source of the bulk of military equipment in the hands of the SPLM-N, even if volumes of captured weapons and ammunition differ significantly in the two theatres. While most weapons observed were previously held by SAF, a minority appear to have come into SPLM-N hands via other sources. Examples are documented in the report “Comparable SPLM-N arms and ammunition stocks in South Kordofan and Blue Nile, April 2013”.

The researchers found Chinese 12.7x108 mm ammunition reportedly captured in the battles of al Hamra in June and July 2011 by SPLM-N and captured in Jau by the Justice and Equality Movement (JEM) in February 2012. Identical rounds were observed in Darfur at the SAF military camp of Shangil Tobay in May 2011. In all cases the ammunition was contained in boxes bearing the inscription S.T.C, an abbreviation for Sudan Technical Centre, one of Sudan’s weapons manufacturing plants. Small Arms Survey documented Iranian-manufactured 12.7x108 mm ammunition in both South Kordofan and Blue Nile.

Rounds observed in South Kordofan were reportedly captured from SAF stockpiles during the battle in al Ihemirin August 2011, and from SAF facilities in Kurmuk on 4 September 2011. An 82mm mortar bomb (0-832 series), has a construction and markings consistent with those manufactured at the Yarmouk Industrial Complex in Sudan. The bomb (manufactured in 2006) was reportedly captured in Kurmuk, Blue Nile, in early September 2011. The Small Arms Survey observed three Chinese-type QLZ-87 35mm automatic grenade launchers in South Kordofan and Blue Nile.

The SPLM-N reportedly captured QLZ-87 launchers from the SAF during the battle in al Hamra, South Kordofan, in June/July 2011, as well as during the unsuccessful attempt to take control of Tolodi, South Kordofan, in April 2012. The Small Arms Survey inspected remnants of bombs and rockets used by the SAF in both South Kordofan and Blue Nile. While remnants and shrapnel of Antonov-dropped bombs did not provide enough elements (visible marking codes or any other particular features) to enable the exact identification of the bombs, it was possible to document, in both theatres of the conflict, remnants of Chinese-manufactured 302 mm Weishi long-range rockets for multiple launch rocket systems.