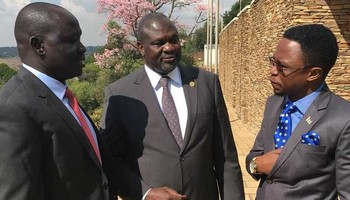 South Sudan rebels have rejected IGAD’s proposal to relocate their leader Riek Machar from his forced detention in South Africa to another country, signalling another difficult round of talks in Addis Ababa.

Tingo Peter, the secretary general of the Sudan People’s Liberation Movement-In-Opposition (SPLM-IO), said the IGAD Council of Ministers met with Riek Machar in South Africa recently and demanded his relocation to another country.

“We demand Machar’s release unconditionally to participate in the talks because he is the leader of the SPLM-IO movement,” Tingo said in an interview with Radio Tamazuj today.

“It is better for Machar to stay in South Sudan if IGAD insists on his relocation to another country,” he said.