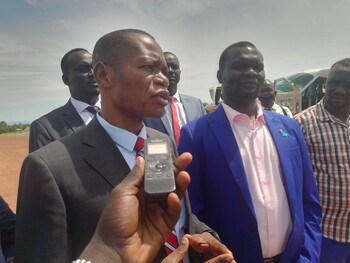 The South Sudan minister of public service Joseph Bangasi Bakasoro, and a delegation from his ministry visited Eastern Equatoria State on Monday to streamline the pension system and discuss challenges in the scheme.

“We came with the team to discuss the pension scheme in the state and to see how you are collecting the pension of the civil/ public servants in this country," Bakasoro told Radio Tamazuj. "We are coming here to discuss the pension of the servants because so many civil servants, police name them, go without pension. So, what is happening and what can we do to guarantee their pension is paid so that when they retire they have something to go with to their homes."

Jacob adds, "The pension fund will want to come in collectively and invest it so that now by the time anyone is to go for retirement at least there is a lump sum that will be enough for them."

Abala Jildo Remy, the acting minister of public service in Eastern Equatoria said the ministry has prepared a list and files of employees who should receive the pension fund.

He said poor pay and a delay in salary payments has harmed service delivery in the state as qualified state desert government jobs for greener pastures.