Peace parties have to do more, UNMISS Chief says 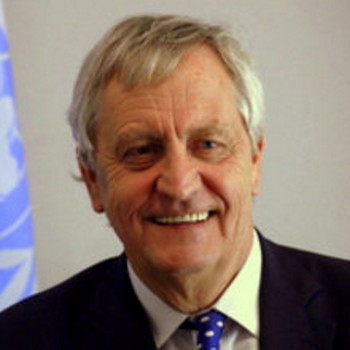 Special Representative of the Secretary-General for South Sudan and Head of the United Nations Mission in South Sudan, Nicholas Haysom. [Phto: UN]

The United Nations Mission in South Sudan (UNMISS) boss and UN Secretary-General’s Special Representative for South Sudan, Nicholas Haysom says there is progress in the implementation of the 2018 peace deal, but parties still have a daunting task.

"The realization of the transitional security arrangements is pivotal to every aspect of the agreement.  For example, the electoral process can only be guaranteed by impartial, unified security institutions.  The lack of progress in the implementation of the transitional security arrangements is now the major challenge, Haysom said. "We commend the efforts of  IGAD and R-JMEC to encourage the parties to reach consensus on the unified command-and-control structures of the national security institutions.  President Kiir has assured that this will be agreed upon imminently, as will the graduation of uniformed personnel currently stationed in training centers.  We encourage the parties to compromise in the interest of achieving this vital benchmark without further delay."

He noted that the slow pace in implementing the security arrangements has led to fractures within the SPLA-IO and would negatively affect the peace agreement.

"The desertions by forces led by Generals Gatwech, Olony, and Thomas Dhul, and the conflicts between these groups and the forces loyal to Riek Machar will undermine the peace process.  At the political level, this has exacerbated the imbalance between the main parties to the revitalized peace agreement.  It is imperative that the parties put aside adversarial politics to work as a unity government in support of peace.  For this reason, I joined the IGAD Council of Ministers and the South Sudan Presidential Council in calling on both factions to resolve their differences politically," he added.

Haysom said UNMISS will closely monitor the evolution of the divisions within the SPLM/A IO, as it could ignite violence within IDP camps.

Although reports indicate a decline in fighting between parties to the agreement, Haysom says, "The increase in sub-national violence, as seen in Greater Tonj, Tambura and elsewhere is of real concern.  The situation is aggravated by the proliferation of small arms, and, outside Juba, under-resourced state governance and security structures."

"Both the Government and South Sudan Opposition Movement Alliance have blamed each other for insecurity on the Juba-Nimule road, the arterial road linking South Sudan to its southern neighbors. The Government has recently paused its participation in the Sant’Egidio-led talks, accusing the SSOMA of responsibility for the attacks on civilians on this road, and accordingly of engaging in talks in bad faith," the UNMISS boss said while reiterating that they are committed to supporting the Community of Sant’Egidio in bringing the hold-out parties within the framework of the peace agreement.

Haysom further expressed concern over what he called 'increasingly restricted civic space, the detention of journalists and leaders of civil society groups, and the shutting down of internet service providers following the calls for non-violent protests by the People’s Coalition for Civic Action'.  He urged the parties in the peace process to work together and respectfully and inclusively to expand the civic and political space in South Sudan.

He also highlighted the humanitarian challenges including food insecurity, devastating floods, and the economic pressures on the people of South Sudan.

In conclusion, the UN Secretary-General’s Special Representative assured the security council of its commitment to supporting the people of South Sudan in their search for sustainable peace.