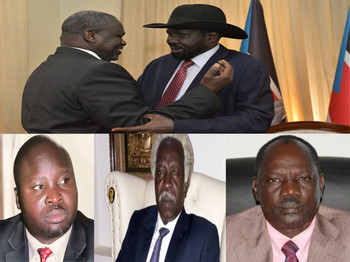 The parties to the Revitalised Agreement on the Resolution of Conflict in South Sudan (R-ARCSS) have attributed the slow implementation of the deal's provisions to the financial crisis biting the country, a lack of political will, and the global Coronavirus pandemic.

The statement by the parties marked the first anniversary of the formation of the Revitalised Government of National Unity in February 2020, in the implementation of a three-year transitional period leading into elections in 2023.

The parties acknowledged that some progress had been made so far despite the slow implementation process.

According to the agreement, the parties should unify and deploy armed forces and reconstitute the national legislature and council of states. However, observers say the implementation has been lagging.

“Coronavirus affected the implementation of the agreement, but I see that we are on the right path since the presidency was formed," he said.

Makuei explained that the transitional period started when the presidency was formed and the state governors were named. He insisted that the government can complete some of the remaining tasks and postpone others till after the elections.

He continued: "The census is one of the issues that can be postponed until after the transitional period because it requires equipment, and it is difficult to carry out in the remaining period. Likewise, elections cannot be linked to the return of refugees to their areas."

Concerning the establishment of a hybrid court to try crimes committed in the country, Makuei said, “Without silencing the guns, it is not possible to talk about the hybrid court, and those who rush to establish the court are not present in South Sudan. So the international community must consider the realism of the agreement," he added.

The government mouthpiece responding to concerns raised that the appointment of state governments by the president is against the peace deal said the presidency acted so due to a lack of constitutions in the states.

He further blamed some parties for failing to submit their nominees to the national parliament as derailing the process.

For his part, Nathaniel Oyet, the SPLM-IO representative to the National Constitution Amendment Committee (NCAC), said that many challenges stand in the way of implementing the agreement and that the parties have led to failure during the pre-transitional period until now.

"There are many outstanding issues, which are the issues of the pre-transitional period, and until now the parties are unable to implement them. These issues include the unification of forces and the formation of governments, a year after the start of the formation of the government," Natanel said.

According to Oyet, implementation of the agreement is not limited to the formation of governments but also the implementation of the security arrangements, the amendment to laws, humanitarian aid, the issues of displaced persons and refugees, and the permanent constitution, which are still pending.

On the delay in the reconstitution of the national assembly, Oyet said, "We submitted the names of our candidates to the implementation committee but other parties to the agreement have failed to present a list of names of their candidates."

"This agreement may fail if the parties do not implement the security arrangements. There are forces in the training centers who have not been graduated. Other forces are still gathering in other centers yet they cannot join their colleagues in training camps. Even those in the camps do not receive basic services such as medicine and accommodation," he pointed out.

"The JMEC asked the parties to provide the names of the participants in the permanent constitution preparation workshop, and the commission used a German organization to facilitate the task and the parties provided the names. But the previous government, led by Salva Kiir, failed to provide the names of its representatives. The workshop was then postponed and the German organization returned to Germany. This shows the government's lack of seriousness and a lack of political will," he explained.

Oyet noted that it would be an uphill task to complete all the pending tasks within the remaining period.

He called on the peace monitors JMEC to play a more active role in ensuring the parties work towards full implementation of the agreement.

For his part, Kornelio Kon, the head of the National Alliance of Political Parties said a lack of political will, financial crisis, and the coronavirus pandemic are all to blame for the slow implementation of the deal.

However, he acknowledged that the agreement brought an end to the conflict in the country.

"Many who were not able to participate in government for about 15 years are now included in the government. The government is now comprehensive and this is a difficult political process," Kon noted.

Kon says once the formation of government institutions is over, then the transitional period can start. He argues that there is no government without ministers and institutions.

"It must be announced to the people, after the completion of the appointment of the National Parliament and the three state governments and administrations, that this is the beginning of the transitional period," according to Kon. "There is no government without ministers and parliament, which approves laws, but in the analysis as a politician, there is no government yet, and the presidency of the republic is not the government alone."

The parties signed the R-ARCSS in December 2018, paving way for the formation of a revitalized transitional government that would take the country to an election after three years.