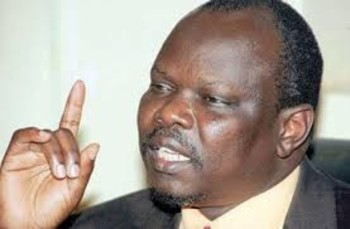 Pagan Amum, leader of the former detainees, has rejected the final version of the peace deal initialed by his negotiating team on Tuesday, a decision that could lead to a major split within the group.

SPLM-FDs is a faction made up of senior SPLM party officials who were detained by President Kiir when the conflict began in December 2013.

“We, the SPLM Leaders (Former Political Detainees – FDs) regret the initialing of the ‘final text’ of ARCSS by Cde Deng Alor Kuol as this has been done prematurely and without proper consultations, leaving many issues unresolved to become the bone of contention and seeds of future conflict,” partly reads Pagan’s statement seen by Radio Tamazuj today.

The South Sudanese opposition leader said the outstanding issues that they had raised earlier on need to be resolved satisfactorily and reflected in the final text of the draft agreement before initialing.

“At this eleventh hour, we can no longer rely on vague assurances of initialing or signing documents with reservations or having points of disagreements bracketed or referred to other bodies for decision,” the statement said.

“Similarly, we cannot shelve substantive issues for further negotiations during the time of implementation simply because we want to give the appearance of showing concern for ameliorating the suffering of our people,” adds the statement.

Amum further said they believe that to negotiate these outstanding issues during the stage of implementation will be a futile exercise. He stressed that the same issues should be discussed and resolved now and around the table, with all the parties being part and parcel of the discussion and the decision.

“These same issues have been identified by SSOA and other opposition groups as points of differences so they need to be addressed and resolved in order to assure sustainable peace,” Pagan said.

“First and foremost among them is the bracketed issue of the 28/32 states which were decreed in contravention of ARCSS and the Constitution. It is worth noting that the semi-final text of the would-be Revitalized ARCSS was shared on 27th of August, 2018. By the time of initialing yesterday 28th August, 2018, we the members of SPLM Leaders had not finalized consulting amongst ourselves. Hence the initialing was not based on consensus nor majority decision,” he added.

Pagan, a former secretary general of the SPLM party, said the initialing of the peace deal by his negotiating team in Khartoum was invalid. However, he said they remain open and ready to continue engaging in the process to bring genuine and sustainable peace back to South Sudan.