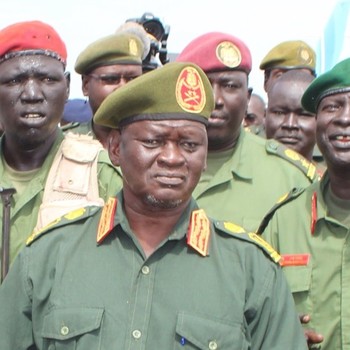 Events seem to have spiraled out of control so fast within the SPLA-IO in the last couple of months that the outfit might have reached a self-destruction point of no return-if not mitigated.

It is worth noting that Gen. Simon Gatwech, who last week vehemently rejected his appointment as a presidential peace advisor, has been steadfast in calling for the proper implementation of the peace agreement, especially Chapter Two which deals with security arrangements. He has in the last year repetitively called for the training and unification of forces as stipulated in the peace agreement and also asked IGAD and the guarantors of the peace deal to allow Dr. Riek Machar to visit and brief the SLA-IO forces about the peace deal in vain.

Often coming out as a voice of reason, Gen. Gatwech has often almost callously disregarded military decorum and discipline, and berated his now erstwhile boss, Dr. Machar, for pandering up to President Kiir, abandoning his forces and forfeiting the struggle for democracy for personal gain and political position.

Earlier in May, Gen. Gatwech suspended the SPLA-IO’s Military Intelligence Director, Maj. General Dhiling Keak Chuol, for alleged insubordination and supplying munitions without the former’s knowledge among other things. Dr. Machar countermanded the suspension the very same day. However, the vitriol was just beginning to simmer.

Last week, Gatwech came out guns blazing and accused Machar of sending munitions through Gen. Dhiling Keak to arrest him and the Pandora box flew open.

Carefree and almost bordering on cavalier, Gen. Gatwech has called out Dr. Machar severally and publicly and said the latter is a prisoner in Juba and has no powers to act in the interest of the SPLM/A-IO and the people of South Sudan.

The SPLM-IO director of media and public relations stated that Gen. Gatwech was effectively relieved as SPLA-IO Chief of General Staff effective 22 June. Gatwech fervidly denies that he was ever consulted about being appointed a presidential advisor.

Interestingly, Gatwech’s elder brother, Bilieth Dual Hoth, was the chief of the Chiedak (Uror County), one of the largest sections of the Lou Nuer. When the chief (Bilieth) died in May 1964, the young Simon Gatwech was chosen to replace him and pulled out of intermediate school to come and ascend to the throne and lead his people.

Gatwich went ahead to become the paramount chief of the greater Lou Nuer (Akobo, Nyirol, and Uror) for 19 years until he joined the SPLA guerilla movement and was commissioned at the rank of Major.

Dr. John Garang then came into play with his new rebel outfit and realized the value the young chief would add to his budding rebellion and recruited Gatwech into the SPLA shortly after its inception. Indeed, he was instrumental in mobilizing and recruiting Lou Nuer youths en mass into Dr. Garang’s then-budding SPLA.

Gatwich, being a prominent in his native Lou Nuer area, was very influential. With thousands of Lou Nuer youth in tow, Gatwech trudged to Bonga Unified Training Center in Ethiopia where they were all trained into SPLA soldiers. He was seconded for cadet training and was in the same intake as Dr. Riek Machar-perhaps this explains the on-off shifts in familiarity and camaraderie.

The young chief, then Major Gatwech, was instrumental in the opening of movement and supply routes from Lou Nuer areas to SPLA rear bases Ethiopia at the time when there were hostilities between the Anyanya 2 and the nascent SPLA.

He later successfully commanded several battalions in the Central Nuer District as it was known before being tasked by Dr. Garang to help in establishing the front in Southern Blue Nile together with Kol Ammum.

Gatwech cut his teeth and earned his spurs during the long liberation struggle. Being a chief, he is respected and venerated by those in his charge.

Close sources also say he has been a uniting factor throughout his life because of his mixed parentage-his father Nuer and mother Dinka. He is said to have exploited this well when he brought the Nuer, Dinka, Anyuak, and Murle together while commanding in central Upper Nile during the liberation struggle.

It is important to note that this is not the first time Gen. Gatwech and Dr. Machar have had a spat. In 1991 he joined Machar’s SPLM/A United but they parted ways due to what Gatwcih referred to as Machar’s mismanagement of the army. However, Gatwich was also cited for active involvement and culpability during the 1991 Bor massacre after the SPLM/A acrimoniously split.

Again in 1997 during the Khartoum Peace Agreement, they disagreed and Gatwech threw in his lot with Gen. Paulino Matip’s South Sudan Defence Forces (SSDF).

It is important to note that Gen. Gatwech and Dr. Machar exited Juba separately and had no mutual plans when the December 2013 crisis exploded. Gatwich only stampede out of Juba when his house was attacked and fled for dear life. They were to meet up again as comrades in war.

Gatwech was appointed as chief of general staff of the SPLA-IO on 21 December 2014 and has firmly held on to the position until his removal by Dr. Machar a few days ago on 22 June.

In 2015, Gatwech was apprehensive and warned against members of the SPLM/A-IO going to Juba due to lack of proper security arrangements and his fears later turned out to be valid when there was an implosion in Juba in July 2016 which led to the collapse of the peace deal then.

Shooting from the hip

He has a reputation of being straight as an arrow, takes no prisoners, holds firm to his convictions, and has a no-holds-barred style of delivery. Always fatherly and regal, he has a character of exhausting peaceful methods and negotiations before resorting to violence. He reasons and forwards his arguments lucidly and this has won him admiration among South Sudanese on social media recently after he accused his erstwhile boss of going to Juba, drinking cold water, and earning a salary while the IO forces are going hungry and suffering in the bush.

He alludes, and correctly so, not having forgotten the violent events of 2013 and 2016 and uses them as a basis for demanding that the security arrangements be implemented to the letter in order to avoid a deluge of future violence.

There is most likely going to be a conflagration and outright war or clashes between those loyal to Gatwech and forces loyal and allied to him like the Agwelek Division of Olony and White Army on one hand and forces loyal to Machar joined by Kiir’s forces on the other.

Machar has in the past neutralized people deemed to be potential rivals among the Nuer from Eastern South Sudan like Peter Panok who was killed during the acrimonious 1991 SPLM/A split.

Kiir has also made preemptive assassinations of rebel leaders like George Athor and in the recent past Kerbino Wol. Stories of Kiir liquidating enemies within the SPLA when he was in charge of intelligence during the liberation struggle are legendary. Most recently, Gen. Stephen Bouy narrowly survived being killed when he was arrested in the Mayom area.

True to form, Gatwech revealed that Machar sent munitions to be used in attacking and neutralizing him.

SPLM/A-IO will definitely not be the same again and will emerge fragmented, most likely with Riek carrying an empty bowl or an edifice of what it once was.

Gatwech, his loyal troops, with Gen. Johnson Olony buttressing him, will most likely form a new rebel outfit that will control swaths of land in the greater Upper Nile.

Riek and Kiir, thick as thieves, will join forces and work in cahoots to maintain the shaky status quo to their benefit.

Those in the know say Gen. Gatwech nipped Dr. Machar’s plans to arrest and neutralize him in the bud when he captured munitions delivered by the SPLA-IO Director of Intelligence. Gatwich immediately suspended the intelligence director without consulting Dr. Machar. This is when things really came to a head and the lines were now clearly drawn. Gatwich came out on top and Machar had to bid for time.

In his next move, Machar, in cahoots with Kiir-their fates now seem to be joined at the hip- appointed Gatwech a presidential advisor on peace. The duo in the presidency should have known better?

Gen. Gatwech clearly has command and is venerated by the bulk of Dr. Machar’s SPLA-IO, especially but not limited to the greater Upper Nile. Gatwech has also repeatedly voiced concerns about the welfare of forces under his command all over the country and this has naturally endeared him to the SPLA-IO soldiers because as Napoleon Bonaparte said, “An army marches on its stomach”.

SPLM/A-IO also came to fragmentation when the government of national unity was formed and Dr. Machar and his inner cabal were accused of nepotism when the latter selected his wife as Defense minister and purported son-in-law as petroleum minister among others.

However, being shrewd and in Juba, Dr. Machar has access to petrodollars and can of course rent the loyalty of some influential SPLA/IO commanders. Kiir would naturally acquiesce to and willingly facilitate this seeing that their fates are intertwined and they can only get legitimacy through their joint current ‘enterprise’.

Having faced the working end of Salva Kiir’s AK-47s and other weapons, including Russian MI-24 helicopter gunships in 2013 and 2016 from a position of disadvantage, it is clear Gen. Gatwech is not keen on a sequel. He clearly plans not to be taken by surprise again.

As for Kiir, What is left of his SPLA, now SSPDF, has lost morale, is disillusioned, and has not been paid for months. The war took its toll on them. Kiir has come to heavily rely on his republican guard-the Tiger Division and Akol Koor’s National Security personnel who have had to even be deployed to frontlines and sent to mitigate security threats-the most recent being in March when elements of the Tiger were sent to extract Governor Lobong when he was ambushed and surrounded by armed Buya youth in Eastern Equatoria.

It would also be difficult and foolhardy for Gatwech to launch an all-out war without a sure source of munitions resupply.

Most South Sudanese are however happy with Gatwech’s move if only to stem the perceived shenanigans and sluggish implementation of the peace deal by Kiir and Machar-especially the lack of political will by the SPLM )IG) in Juba.

Counter defections are also rife in the country in pursuit of higher ranks and political stratification and this will definitely prominently play out in the days ahead, especially by soldiers. The politicians will want to coalesce around Gen. Gatwech-the new kid on the block, especially those who missed out during the recent jobs allocation bonanza.

Gatwech’s concern for the welfare of the thousands of troops marooned in cantonment sites and training centers is also music to the ears of the soldiers.

Grandfatherly, amiable, and with a hearty laugh, yet firm and strategic militarily, will Gen. Gatwech take the day? We watch and see who will triumph and or concede in this power game of wits and brawn!

Innocent South Sudanese are steeling themselves for more anguish yet again.

The author Koka Lo’Lado is a journalist and can be reached via kokalolado@gmail.com