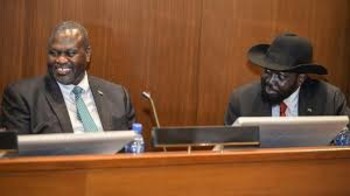 Known for operating with a vicious precision, his trademark is ruthlessness, and how he maneuvers his political rivals is irrefutably effective. Salva Kiir, the man in question, is a formidable tyrant with a bag full of cruel leadership practices. The Khartoum’s peace agreement is one of those political blessings that a calculating dictator like Kiir could easily exploit to further his oppressive techniques. This is an attempt to show that the Khartoum-brokered deal could end the civil war; however, there are plausible reasons to believe that the pact could merely end up preserving the current tyrannical system, empowering Kiir to further strengthen his grip on power.

It is worth acknowledging that the only best way for South Sudan to move forward would be for peace to return to the country. I assume nearly all South Sudanese are tired of war and ready for peace. However, there are many contentious issues that, if not properly addressed, will turn the agreement into a pro-Kiir deal, rendering him the ability to continue ruling with impunity. These issues include hybrid court, legislative, security arrangements, and constitutional amendment body. All four of these issues are important, but the most important issues that require critical scrutiny are the constitutional amendments committee and future national legislative body. So, let us dig deeper into the constitutional amendment committee, including the impending role of the proposed legislative assembly.

To refresh your memory, it is good to remember that real political reforms in any established society are done legislatively. This is what South Sudanese expect from the Khartoum’s peace agreement. Regrettably, a careful analysis of the pact reveals that it would be nearly impossible for the armed opposition and other opposition parties to advance their democratic reforms through parliamentary processes because their anticipated Members of Parliament (MPs) will be outnumbered by MPs representing the incumbent government. The reality is that opposition MPs will not pass any reform bill Kiir deems as a threat to his presidency. In a logical sense, the incumbent MPs will represent 60.4% while opposition MPs will have 39.6% in the proposed parliament. Khartoum’s peace agreement stipulates that the Transitional National Legislative Assembly (TNLA) will have 550 Members of Parliament (MPs). The deal gives the incumbent TGoNU 332 MPs, whereas the SPLM-IO and other opposition parties will have 218 MPs. This is not my opinion—it is a mathematical fact. Those who agree with this approach should consult with their consciences. Precisely, the parliamentary maneuvering is all about the number — the majority to be precise, and back-door deal makings. Given the nature of the legislative game, Kiir clearly would not allow some of his MPs to be bribed by the opposition leaders, let alone the fact that he will still indirectly be in control of the nation’s financial system.

There are some people within the Sudan People’s Liberation Movement-In Opposition (SPLM-IO) and other opposition parties who care more about making any peace deal with Kiir’s regime so that they can be part of the proposed future Transitional Government of National Unity (TGoNU). These people are desperate—shockingly desperate—and eager to exchange their supposedly reformed political doctrines with positions. One thing is clear: their desperation is logically irrelevant, because they seem to be focusing more on what they want rather than what the people want. What the people of South Sudan want is an utter political reform in the country.

In the case of constitutional reform, Kiir is clearly not into it. For instance, the Committee formed to amend the constitution should have been given mandates to amend the current anti-democratic constitution before the proposed TGoNU is formed. Kiir cunningly frustrated the process in September by claiming in Ethiopia’s capital, Addis Ababa, that the constitution would only be amended four months after the transitional government is formed. One wonders where on the planet earth the leaders of the SPLM-IO and other parties would have been deceived by this self-serving strategy. There is no guarantee Kiir will honor his promise. Remember, Kiir knows what he is doing: 16 weeks is enough time for him to fully implement or reject the agreement. What is ironic about the constitutional amendment process is that Salva Kiir is sure about his true intention while opposition leaders seem to rely on Kiir’s four-month time frame. In other words, the leaders of the SPLM-IO and other parties appear to have learned no lesson, let alone the July 2016 Juba one (J1) incident. Given all these political missteps, one can easily conclude that all opposition parties have either given up their political doctrines in favor of reuniting all ranks of the ruling Sudan People’s Liberation Movement (SPLM) party and then resumed business-as-usual or are clueless about what they are dealing with. This assertion seems absurd, but the way opposition leaders embraced Kiir’s notion of revising the constitution four months after the formation of the future government explains it otherwise. Yes, peace is good, but emotion should not blindfold national leaders who, for five years, vowed to transform South Sudan’s political system.

Under the current constitution, Salva Kiir wields an absolute power. For instance, Kiir can dismiss any government official, including the elected ones. Kiir’s power does not stop at the national level. The constitution simply made him an unchallenged leader. The man can even dissolve both the national and states parliaments as he wishes. His powers do not end here. Kiir can also remove state governors and parliamentarians at any time of his choosing. He can do all these through a presidential decree because that is what is written in the current constitution. Salva Kiir is addicted to these broad powers vested in him by the very constitution he orchestrated. For the opposition leaders to assume that Kiir, for some mysterious reasons, will allow full amendment of the constitution is a mere joke. Given all these facts, it would be irrational for any reasonable person to think that Kiir will allow the constitutional amendment committee to remove the tyrannical powers he has been exercising for nearly eight years.

There is no doubt the five-year civil war has caused so much suffering. The recent estimate released in September 2018 by the United Kingdom-based London School of Hygiene and Tropical Medicine of at least 382,000 dead shows that the conflict has killed a lot of people, most of whom had nothing to do with the political madness that began in early 2013. This is the reality any sensible person would not deny. The number speaks for itself. Most of the 382,000 people who lost their lives died because of a political insanity perpetuated by Kiir in December 2013.

History and publicly available data show that most dictators tend to have hard times transitioning into a democratic process. It is true that some tyrants change, but it would not be a surprise if Salva Kiir happened to be in the category of autocrats who changed their leadership mindsets after their people demanded democratic reforms. Beware though that it is nearly impossible for a documented dictator who ruled for many years to abandon his or her dictatorial mentality. It is to be recalled that Kiir was loved by most South Sudanese when he took over the helm of the SPLM soon after the accidental death of late Dr. John Garang in July 2005. This does not mean he is a better leader. The logic behind this rather reprehensible assumption was that he was the first deputy to Dr. Garang. At that time some people thought Kiir’s personality fit within the meaning of leadership quality. What many people did not know at the time he was elected as the leader of the SPLM is that Kiir already had a fearsome persona. It is to be recalled that Kiir captivated this merciless character when he was the head of the Sudan People’s Liberation Army (SPLA) military intelligence. Consequently, Salva Kiir’s destructive leadership has its roots from the mid-1980s to the early 1990s.

The current constitution is indisputably dictatorial. The best way to transform South Sudan’s political system from dictatorship to a democratic process is by completely amending the existing constitution and replacing all autocratic constitutional provisions with democratic ones. This is the right time to do it, especially when a national constitutional amendment committee was established in the pact. Kiir’s constitution deserves to be thrown into the Red Sea—in fact, it deserves to be given to the master of hell, if any. The SPLM-IO and other political groups must seize this opportunity to scrap all the statutory provisions that made Kiir a legal tyrant. The people of South Sudan did not fight against Khartoum’s regime only to face the same despotic leadership practices that were once imposed on them. If Kiir is serious about peace, then he must allow the constitution to be completely altered.

The author, Duop Chak Wuol, is the editor-in-chief of the South Sudan News Agency. He can be reached at duop282@gmail.com.