Opinion: Why SPLM reunification is irrelevant 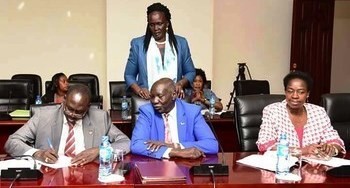 There has been an ongoing debate about the possibility of reuniting the factions of the ruling Sudan People’s Liberation Movement (SPLM) party. There are people who believe that the only way to resolve South Sudan’s civil war is through the reunification of the party. Other people are not sure whether bringing together different groups of the SPLM would change anything.

The two competing camps have their own reasons supporting their views. This is an attempt to show that the reunification of the SPLM would not bring reforms needed by the people of South Sudan — in fact, it would only justify the party’s Kleptocratic mentality and legitimize Salva Kiir’s tyranny.

I would like to first publicly warn my fellow South Sudanese to not be deceived by the recent visit by Salva Kiir to his Holiness Pope Francis. This is not the first time a calculating tyrant like Kiir used religious leaders to hide his immoral side. It is known that most ruthless tyrants tend to associate themselves with religious beliefs to make themselves appear as good people.

Back to the topic, there are two main contentious issues for and against party reunification and what it can achieve if its competing ranks and files decide to become one united political bloc. The first argument is that if the SPLM becomes one united party, then the conflict will suddenly end. This is clearly not the case. In a logical sense, proponents of this argument are either government supporters or uninformed about the exact situation on the ground. On the other hand, there are those who are not sure about what the reintegration of the SPLM would do for the country. These people have good reasons because the reunification is clearly not a solution for peace or reform. I believe that the ruling party under Kiir is simply trying to convince different groups of the SPLM to rejoin him in his search to prolong his cruel regime.

Salva Kiir is an accomplished tyrant who does not understand that good leadership is a shared responsibility. He believes that by keeping his grip on power, he could rule forever. What he does not know is that there is no permanent leadership because his rule will one day be gone. In addition, Kiir should know that his rule will in the future be reduced to a destructive, murderous, and Kleptocratic regime.

Salva Kiir is a man who knows how to deceive people even in his inner circle to get what he wants. For instance, when Kiir decided to become a dictator in 2012, he began by changing the constitution, claiming that he wanted the constitution to be amended simply because of national emergency issues. At that time, many senior leaders of the SPLM including Dr. Riek Machar of the Sudan People’s Liberation Movement-In Opposition (SPLM-IO) were skeptical about the amendment of the constitution but failed to mobilize the people against such a move. Kiir later managed to bribe nearly all members of South Sudan’s National Legislative Assembly and backed his rather dictatorial move. It was the beginning of the current autocracy.

The SPLM has many problems. Kiir and Machar are not the only hindrances of the party to prevent reforms.  In February 2018, I had a chance to meet many SPLM leaders—especially the Former Detainees (FDs) at a peace talks venue in Ethiopia’s capital, Addis Ababa. I was stunned when some of these leaders initially refused to sign a letter demanding the release of Dr. Machar from his illegal detention in South Africa. It is worth noting that to talk in a manner just to scare people is one thing. But to talk as a capable leader is quite another thing. One thing is clear: former political prisoners must come to terms with reality if they want the people of South Sudan to forgive them for their self-serving political tactics. Their recent move to rejoin the SPLM under Kiir without first demanding reforms shows that they are weak politically and eager to be part of the very brutal system they once criticized. Their decision is disgraceful, to say the least, and amounts to betrayal.

There is a need for peace to return to South Sudan. However, bringing lasting peace without properly addressing the root causes of the conflict could amount to the dismissal of Salva Kiir’s atrocities. The nearly 400,000 people who lost their lives because of Kiir’s political madness want justice. Kiir’s killing with impunity should not be rewarded.

The Arusha Agreement that was signed on January 21, 2015 by factions of the SPLM was meant to reunite the party and to make sure they settled their political differences. The international community came up with such an idea in the hope that reunification of all or most groups of the SPLM will end the civil war. This assumption was not feasible from the beginning given Kiir’s deceptive approach to the peace process. What Kiir wants is not a real reunion of the party. His main goal is to make sure that he deceives party leaders who oppose his leadership into believing that the SPLM is united and that reforms will be done after the reintegration is completed. Those who believe that Salva Kiir is serious about peace this time should consult with their consciences. The man is a cunning dictator who is not in any position to allow the constitution and the SPLM’s by-laws to be reformed. There is no credible reason to believe that Kiir would allow democratic reforms in the party.

However, let us assume Kiir fully agrees to reforms the SPLM.

Is the SPLM capable of reuniting its ranks and delivering much-needed reforms in the country? Will Salva Kiir abandon his tyrannical mindset to allow the SPLM to become a democratic political institution? Will the SPLM ever champion moral, political, democratic values?

Before you draw your own conclusion, I would like to remind you that Salva Kiir is addicted to a dictatorial leadership style. He enjoys appointing and dismissing elected state and national officials even though they were chosen by the people. It would be difficult for him to adjust to a democratic leadership where people express their opinions openly. What would make SPLM reunion even more irrelevant is the fact that Salva Kiir's leadership is technically being controlled by the notorious tribal group, the Jieng Council of Elders (JCE). This destructive tribal entity works days and nights to make sure Kiir works for the Jieng interests even if it means the destruction of the country. Theoretically, what the JCE wants is what Kiir does. In the JCE’s destructive ring, Jieng’s interests outweigh national ones. It is a rather disgraceful move, to say the least.

There is one vital point that I would like the people of South Sudan and the international community to know. This issue is that Salva Kiir’s main devious plan is to use the pre-transitional period to project an image that he is for peace, identifying issues that could prevent him from continuing as the president or help him maintain power after the interim period and then choosing the best option for himself. For instance, if he managed to outsmart other opposition leaders in the transitional period, he would have no problem waiting for election because he knows he will be the only SPLM official presidential candidate to run and potentially win the election. However, if he finds there are issues that derail his despotic rule in the interim period or obstacles that could deny him the chairmanship of the ruling party, then he would strike at the time of his choosing. The SPLM-IO and other political parties must be careful about what they wish for.

The SPLM is no longer a party that represents the people’s wishes. Under Kiir, the party has lost its direction and become a murderer of South Sudanese and looter of the national coffers. This party deserves to be reformed, replaced, or sent to the inferno to meet its slow and painful demise. The people of South Sudan have had enough of the SPLM’s political thuggery. The SPLM is no longer relevant in the eyes of most South Sudanese because it failed to reform its bush mentality. The Sudan People’s Liberation Movement-In Opposition (SPLM-IO), the National Salvation Front (NAS), and other political parties opposed to Kiir’s tyrannical regime must not endorse this dirty political fishing scheme designed to deny reforms needed to transform South Sudan’s current dictatorial political system into a democratic one.

Duop Chak Wuol is the editor-in-chief of the South Sudan News Agency (https://southsudannewsagency.org/. He can be reached at duop282@gmail.com