Skip to main content
Toggle navigation
العربية
Home News Opinion: The name LAFON is not PÄRI but one of the towns in PÄRI
BY HON. VISOR LIKALI OLUM - 18 Jan 2023

Opinion: The name LAFON is not PÄRI but one of the towns in PÄRI 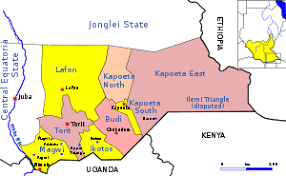 Compatriots, many greetings in the name of our beloved country South Sudan. Despite the current evolution she is experiencing, that can't rule out our love and positive feelings for her. Fellow countrymen, I would like to highlight briefly what is exactly Lafon and why the area is important. I shall be just selective since the town carries a lot of historical acknowledgment which I will not mention all here.

Lafon is located in the Eastern Equatoria State of South Sudan, the headquarters of Lafon County. The people belong to the Pari ethnic group. Lafon Hill is a small, rocky elevation that rises abruptly from the surrounding plain. It is covered with terraced, Pari villages. Traditionally the people made their living primarily from cattle herding. How does it become popular? Let me pick from the point of SPLM/A rebellion against the religious regime in Khartoum. After the 1983 mutiny in Bor town, the first town that the SPLM/A settled in Eastern Equatoria State was Lafon before the movement found its way to the entire Eastern Equatoria State. In December 1984-January 1985, in a major escalation of the conflict, the SPLA launched its first offensive into Equatoria and tightened the screws on Juba by seizing Mangala, 50 miles to the north, and Lafon, 80 miles to the east. Low pay and morale in the army helped the advance. There were reports of southern soldiers selling their ammunition to the rebels.

William Nyuon Bany's forces were defeated in October 1993 and he withdrew to Lafon, where he joined forces with Riek Machar and Lam Akol in August 1991 and brought about an ethnic civil war within the SPLA in the Nasir region, with heavy civilian casualties. Fighting went on in the Lafon area between the SPLA and Machar and Bany's group. Children were recruited to the ranks of the various factions, and a group of Nuer boys was lured from their families by the promise of education only to end up in a camp run by Bany in Magire in Eastern Equatoria state.

The delegation visited the towns of Nasir, Ayod, Waat, Kongor, Lafon, Nimule, Aswa, and Atepi in southern Sudan, and refugee camps in Uganda and Kenya, and interviewed about 200 victims of the war and other witnesses to the violence. Interviews were also conducted in London, Cairo, Nairobi, and Washington, D.C.

That is just to highlight a few histories of SPLM/A that touches Lafon which caused its acknowledgment to date.

In 2013 the country got engulfed in conflict and to refer you to the above-mentioned, how the name Lafon continued to be popularized, in 2016 after the violence erupted in Juba.

9 July and Lafon in August. Armed groups began to arrive in the Lafon area on 8 August and fighting reportedly broke out on 15 August when the Sudan People’s Liberation Army (SPLA) came to retake Lafon town. The resulting insecurity displaced the entire population for a week, and over half of the population is estimated not to have returned back to Lafon.

During the insecurity, there were reports of forced recruitment by armed groups as well as forced displacement and heavy looting of nutrition supplies, medicines, schools, and houses. Insecurity along the Torit-Lafon road has meant that humanitarians operating from Torit have had very limited access to the area since July. In light of reports of continued displacement, an Inter-Agency Rapid Needs Assessment (IRNA) and response team traveled to Lafon from 1 to 3 December to assess the humanitarian needs and provide emergency medical supplies. The team visited both Lafon town, as well as Taar boma in Burgilo payam.

Fellow countrymen, these are some of the history popularizing such a town. It's not just a payam as some of the elites among Lopit describe it. It is historical and deserves recognition. It's wishful thinking and we will not allow such a historical town to go unacknowledged or given recognition fade away.

The claim by some uninformed Lopit elites that Lafon is not inclusive in comparison to the Acronym 'Lopa" is rubbish and childish. The abbreviation Lopa means Lopit and Pari. Where is the inclusivity here as it is well-known that four tribes inhabit Lafon county? We have Tenet tribe, Päri , Otuho and Lopit. Some of them may argue that the name 'Lafon" is etymologically from Päri language. The answer is yes. There is no room today for empty land without owners or being named in another language.
Days for migration in search of empty land are over. There will be no way to find a neutral name in this stage of human evolution. All trees including pieces of grass in a single forest are all name in certain particular ethnic identities or languages. If you are to bring in white men's language, as one of my comrades suggested one day in my conversation with him in his residence, he is the one, He would put the name of the county to be "Unity county." still it wouldn't work since everyone has pride to their identity and days for western colonization are over. If the idea is borrowed from "Unity state" in the Upper Nile region, still wouldn't work because such naming is championing the monopoly of the west and anti-Pan Africanism. If we are to take such reasoning of some illogical Lopit elites then mainly the whole country will be in chaos since most of the counties in the country will end up being abbreviated based on ethnic identities. E.g Torit county wouldn't longer be Torit but will be Otuho and Lokoya county ( O.L county). Magwi county will no longer be Magwi but Acholi Madi county( A.M County). Juba county will no longer be Juba county but Lolubo, Lokoya, Bari, and Nyangwara county ( L.L.B.N. county) Etc.

Fellow countrymen, the truth has to be said on the 5th of May 2004, the late Dr. John Garang de Mabior sent a radio signal, decreeing and splitting Torit county into three. That is to say Torit county, Ikotos, and Lafon county. There was nothing called Lopa. On 28th May 2005 Hon. Ukech Alaak was appointed as Lafon county SPLM secretary.

On 15th Oct 2005 Governor Brigadier general Aloisio Ojetuk governor of EES by then issued his gubernatorial appointment of commissioners, appointing Hon Luka Aribok with the abbreviation "Lopa " which caught everyone by surprise since the name was strange. On 30th of October 2005, President Kiir froze the appointment since it might have appeared like some governors in the state, are creating new counties in their respective states without referring to either him or his deputy who was the current first vice president Dr. Riek Machar Teny and returned the letter to the states to get back to the official counties. On 24th of November 2005, Governor Aloiso, issued another appointment for commissioners nullifying the first appointment with the fake name "Lopa" and correctly wrote it as Lafon with Luka Aribok as a commissioner. And finally, President Salva Kiir Mayardid endorsed it on 25th November 2005. All in all and stubbornly some elites within Lopit who are tribal-minded with no good reason stick with such Acronym that hold no substance.

But on 19th February 2021, as per the revitalized peace agreement which required the country to revert to 10 states with its previous counties, Governor Louis lobong tried his best to make sure these communities live in harmony. He brought the two communities together and told them clearly as per R-ARCSS that the name of the county is Lafon but the commissioner has to be based in Imehejek due to the available facility of the county. The meeting was attended by the four tribes. Tenet, Otuho of Oming, Pari and Lopit. And both agreed not knowing some still hold reservations.

So commissioner Hon Ukach Magisto Agwari who hailed from "Päri" was accompanied by both communities in what was seen as a sign of peace. But unfortunately, the same group who accepted such local arrangements turned against the commissioner and began inciting youth, warning the commissioner to leave Imehejek since he is a commissioner for Lafon. Threatened him by tearing some of his working official letters which indicate the name Lafon or else he should use the acronym Lopa if he wants to stay in Imehejek. Those threats have led the commissioner to evacuate Imehejek as per youth warning.

In my early days, the only towns I know in Lopit are Lokutok and Eboni. These were the only two areas popular during the SPLM/A struggle although they had never been frontline. I never knew Imehejek which is being used as a flagbearer today.

I acknowledge the problem in Lafon county is not caused by all Lopit as a community but some few elites who have narrowed themselves as ethnic politicians and are championing tribal mentality which won't help them at the end of the day. Brothers and sisters, Lafon is a geographical location and the town means while Päri is a tribe name. e.g like Torit, you cannot say it is the same as Otuho. No!

Brothers and sisters, as per what I saw yesterday and heard on the radio for Lopit requesting for Imehejek county and its headquarter is in Imehejek, better if that's what will bring peace. Lafon county will remain a county and we wish our brothers success in their application

The author, Hon. Visor Likali Olum, is a member of the Eastern Equatoria State Legislative Assembly from the SPLM/IO side representing Lafon County.

The views expressed in ‘opinion’ articles published by Radio Tamazuj are solely those of the writer. The veracity of any claims made is the responsibility of the author, not Radio Tamazuj.