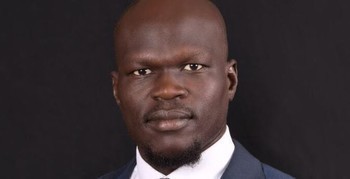 One year ago, on 27 April 2018, Kerbino Wol, the young South Sudanese entrepreneur and philanthropist, was arrested without charge and incarcerated at the Blue House, the headquarters of the National Security Service (NSS).

Following his unlawful arrest, Kerbino was subjected to torturous conditions. He has been accosted in his cell in the dead of night by masked agents threatening his disappearance. Injuries to his kidneys from these struggles left him urinating blood for several weeks. He would spend months in solitary confinement, nursing his wounds on his own without access to medical care. Kerbino’s requests to meet with his family and lawyers were repeatedly denied. He frequently went days (often consecutively) without receiving any food, only to learn later on that his relatives had been bringing food to the facility for him, which was instead eaten by officers of the NSS.  Kerbino has suffered from typhoid, ulcers, and malnutrition, leaving him in a frail condition that was only alleviated by an emergency visit to a clinic in February.

Through all of this, he has lived in fear of being abused and abducted by agents of the NSS.

Such were the brutal conditions faced by Kerbino and his fellow inmates. Despite getting closer to completing the Revitalised Agreement on the Resolution of Conflict in the Republic of South Sudan (R-ARCISS), the summer of 2018 saw additional arbitrary arrests, most prominently of the political activist Peter Biar Ajak in July. On 27 September 2018, the President of the Republic, H.E. Salva Kiir Mayardit, issued a Republican Order Number 17, ordering that all political prisoners be released with immediate effect under the supervision of the International Committee of the Red Cross.  Nevertheless, detainees including Kerbino and Peter were kept locked inside the Blue House.

The world would hear of these cases when it was reported that prisoners briefly took control of the Blue House on 7 October 2018.  Though security forces responded by surrounding the Blue House and repeatedly firing on the compound, the prisoners negotiated a peaceful end to the standoff.

The protest of 7 October was a form of self-defense by unlawfully detained prisoners, in keeping with national and international standards of justice. The prisoners voiced their demands peacefully, communicated with international bodies, and negotiated with the very national authorities who were complicit in their arbitrary arrests.  However, in the aftermath of the incident, the family and lawyers of the prisoners were unable to gain information about their whereabouts. Additionally, Kerbino Wol’s businesses and bank accounts were shut down by the NSS.

The Pan-African Lawyers Union (PALU), working with friends and associates of Kerbino Wol, immediately brought his case before the East African Court of Justice (EACJ), seeking justice for his unlawful arrest and illegal detention.  Though the Government of South Sudan (GoSS) acknowledged the authority of the EACJ by sending a representative to a hearing on 21 March 2019, they have not produced Kerbino before the regional court nor accounted for the circumstances of his incarceration.

Instead, a civilian court in Juba gathered for a pre-trial hearing on the very same day, seeking to deflect attention from the illegal detention of Kerbino and other prisoners by accusing seven men of masterminding the protest of 7 October.  NSS soldiers surround the court, armed with automatic weapons.  Over the course of several sessions, without addressing the arbitrary nature of their arrests, prosecutors have contrived a picture of belligerents who sought to undermine the state on 7 October.

In testimony delivered before the court, Kerbino asked to the fundamental question of his case: “Why was I detained on April 27, 2018?”  One year later, the question remains.  Neither the NSS nor any government body has accounted for the arbitrary arrest of an honest and law-abiding South Sudanese entrepreneur.  Indeed, the circumstances of Kerbino’s illegal detention are not even being considered by the court in Juba.

In Juba, the case being prosecuted by the South Sudanese authorities has limited its focus to the incident of 7 October.  However, in Arusha, the case brought before the EACJ by PALU has widened the scope of Kerbino’s detention, demanding that the Government of South Sudan account for the unlawful arrest of Kerbino Wol, as well as the shutting down of his businesses and accounts, which resulted in the loss of jobs for over one thousand South Sudanese citizens.

The East African Community has taken a sharp stand against illegal detentions and committed its member states to uphold the highest standards of justice in accordance with the rule of law.  Still, the representative of the Government of South Sudan in Arusha attempted to argue on 21 March that the Juba case precludes the necessity for adjudication in the EACJ.  However, the torturous conditions suffered by Kerbino Wol affirm the need for the GoSS to account for the full circumstances of his unlawful arrest and detention.  For this reason, the case in the EACJ must continue to operate independently, and Kerbino Wol must be permitted to testify before the EACJ as well.

When the Juba trial began, the South Sudanese news blog PaanLuel Wel posted a photo on Twitter of Kerbino Wol and Peter Biar Ajak that was accompanied by a statement summarizing the crux of the case being prosecuted against them:

“The government is trying, both in the court of law and that of public opinion, to make the incredulous case that these two successful and inspirational gentlemen - one a businessman and a former solider (Kerbino Wol Agok) and one PhD student and a lost-boy (Peter Biar Ajak) - are the main enemies of the state, more than the unknown, and the known, gunmen of South Sudan.”

It has become painfully apparent that before any new government can be formed in the name of peace, all remaining political prisoners and unlawfully detained citizens in South Sudan must be released.  The Government of South Sudan can build confidence in the R-ARCISS from Juba to Arusha to the Vatican by exonerating these inspirational youth role models, and focusing their efforts on promoting reconciliation and pursuing the many criminals still at large in South Sudan.

It remains to be seen how seriously the leadership of South Sudan has committed themselves to peace and justice.

Justice for Kerbino Wol and his fellow prisoners would mean that young people can be confident that the government is working to support them, not repress them.  Justice in this case would mean that young people can live safe from arbitrary arrest, and feel comfortable starting businesses, educating themselves, and innovating new solutions to the complex social and economic problems faced by the citizens of South Sudan.

It is the responsibility of good citizens both to act in accordance with the law and to call attention to unjust and unlawful conditions.  Kerbino Wol stands as a shining example of the success and dignity that all South Sudanese youth can hope to achieve.  His imprisonment represents a deep injustice for every citizen of South Sudan.  Despite torturous conditions, solitary confinement, and the persistent threat of military repression, Kerbino Wol asserted in his testimony that he continues to be the only thing he has ever been: a good citizen of his country.

Dr. Robert A. Portada III is an Associate Professor of Political Science at Kutztown University, USA.