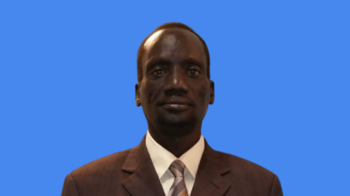 Neutralized by an ineffective 2018 peace deal, with its head no longer the roaring beast of yesteryears, SPLM/SPLA-IO is now ensnared in the toughest dilemma to cross its most shakiest bridge.

Being none other than successful caging and humbling of Dr. Riek Machar in the quietness of Juba-2 residence where he continues counting his luck as First Vice President of no say and no influence. With no one to blame, except his usual love for impressive titles, assuming attitude and inaction which together graduated to present misery plotting to scatter followers in different uncertain directions.

A couple of whom already resigned to languishing in the wild west, as the rest found comfort in the unfamiliar territory of the enemy. Those still hanging around him are mere go-getters hoping to get falling alms from Kiir’s dining table. All in the name of payless jobs not worth their efforts to better their lives, let alone those of their loved ones. Others are the faithful keeping vigil in solidarity with Machar, the ‘’Longar’’ till he either defies the odds or disappears into oblivion. Both the go-getters and faithful ones, like the goat and butcher to the slaughterhouse, have nothing in common, and neither have they anything to do with the hyped-up democratic reforms program IO wants to effect in the hopeless case South Sudan has become. What he is left with as be known to closer political observers is his usual never-dying optimism deep down in the belly of the Nile crocodile.

The upcoming SPLM/A-IO’s 6th National Conference, postponed from November 23rd -27th to Ist week of December, of 1300 delegates in the capital Juba is just a talking shop not to even change a single gate of its conference’s venue. Since Machar has already lost the compass to direct the way peace should be fully implemented, at least in his interest. And neither can he convene a conference in Juba to tell his people to return to insurgency to the detriment of his fragile fate in President Kiir’s crashing palm. The conference’s screaming theme – ‘’SPLM/A-IO: Transforming From War To Peaceful Governance’’ as recently and bombastically announced by his long time personal Secretary, James Gatdet Dak Lampuar is nothing, but an isolated rumble in the jungle to change the dwindling fortunes of the moribund movement. It is rather more of a rallying call by Machar to keep faith in supporters agitated by continuous failings of R-ARCISS in and away from Juba. Among the failings is an orchestrated stonewalling to pass and enshrine R-ARCISS into an interim constitution {2011} by the yet to be dissolved national parliament. 2016 TGoNU’s parliament still stays put to be dissolved. Cantonment sites are closing up amidst desertions and staggering death tolls due to a shortage of basic food and medical care. General Jonson Olony was rejected as gubernatorial nominee for Upper Nile State by President Kiir in response to Dinka Padang’s threatening demands. Nominations previously ordered by Kiir to various political posts deliberately stalled to play with Machar’s mind as well as show to the public who is indeed in charge. Hybrid court to try war crimes is scuttled two years after RTGONU is up and running. Oil, the mainstay of South Sudan’s economy is mortgaged into individual private bank accounts till 2023 and probably afterward, with the same oil estimated by experts to be completely drained out in 2035, leaving the country a dry non-oil producer 15 years away from now. The transitional period nears its end with no hope for elections as citizens to be the electorate flee a resurgence of violence. While refugees in the neighboring countries fear to return home. With no countrywide national election insight, Kiir is poised to validate his reign of terror in May 2023 indefinitely through Parliament he dominates, with Machar playing along to be accommodated, should he have to survive physically and politically.

The conference as mentioned above shall be Machar’s leeway to raise his troops’ sagging morale in four non-promising ways. One, he is convening a long-delayed conference, which he avoided when he was in a weaker position, to extend and consolidate his leadership’s mandate under siege from an internal holdout, reformist faction. Two, making delegates 1300 in number is a means of indirectly reliving the memory of his 2016 military contingence that accompanied him to Juba and again to DRC which has popular resonance with IO’s Nuer power base. The number more specifically symbolizes SPLM/A-IO’s resilience in the face of mounting challenges he desperately wants to relive in morale-starved followers. Three, in convening the conference, he is subtly reassuring his tormentor, President Kiir that even though peace is nose-diving, he still believes in it to the delight of the latter who wants him to continue keeping his supporters in the fool paradise of no peace, no war that will see the longest transitional democracy ever in Africa. Fourthly and lastly, Machar wants to bring to Juba all the holdout members who matter with no return tickets under the guise of a fortunes-changing conference and isolate a few non-entities leading the renegade reformist group.

Though in his inner self, Machar is the most worried man in turmoil having been trapped, with leadership to flip through his fingers at any zero moment, prompting him to secretly groom his wife and Honorable Defense Minister, Angelina Teny-Dhurgon to inherit from the backdoor IO’s elective leadership.

He and his inner circle can’t reveal such succession intrigues at play lest supporters abandon him in the wee hours of need and think of an alternative strategy without his blessing. All they do is saying peace is well on course and steadily progressing in order to keep clueless supporters hopeful and indecisive. And by so doing, his royals will be in the swung open jail with him unknowingly till he miraculously crosses the shaky bridge.

Den Vanang is a South Sudanese author and opposition UDRM/A’s Secretary-General. He can be reached via dvanang@gmail.com