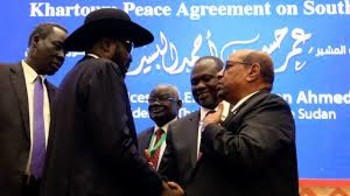 A Revised Entebbe Proposal released Monday in Khartoum as part of the IGAD-led High Level Revitalization Forum HLRF of the 2015 Agreement on the Resolution of the Conflict in South Sudan (ARCSS) provides, among others, for creation of Five Vice Presidents, 550 members of the Transitional National Legislative Assembly (TNLA) and 35 cabinet ministers in the young nation.

For me, I see their concerns as genuine. However, the latest proposal is also very clear in Article 6.2 that “the high number of members of the Executive and TNLA is agreed to be exceptional and for the purposes of the Transitional Period only. The principle of lean government and an assembly that follows the internationally recognized proportions of population to members of parliament shall be observed beyond the Transitional Period.” So that is taken care of, at least with regards to future government.

Besides, one would really encourage those opposition and civil society groups that if indeed they are serious about putting South Sudan resources into well use, they should investigate and talk more about how much South Sudan makes from the oil, gold and other revenues per day, monthly and yearly? And loses how much from illegal gold mining? And how its income and budgets are spent? That is where huge money is lost.

So, for the sake of the Country, a lot of efforts should be made on making the government accountable and transparent. The opposition and civil society could do that now. They should also focus on achieving the reforms in the oil sector and other related areas as provided for in ARCSS. Having a big government is not a good thing but it is currently, or as the parties have made us believe, the necessary incentive for stopping the conflict. What reasonable, urgent recourse to ending South Sudanese suffering is available?

Secondly, during the transitional period, we should make sure we achieve justice, reconciliation and healing, form a competent, representative national army and organized forces, demilitarize our politics and communities, and depoliticize our military, recover our economy, achieve legal and institutional reforms to ensure democracy, and finally come up with a Permanent Constitution, which ARCSS provides that shall be Federal. The type of Federalism will be discussed and approved by the people of South Sudan during that process. ARCSS is very clear on this and I do not understand why some groups keep on saying a federal system should start off immediately during the transitional period. These are just dishonest political talks to lure support from emotional citizens who are uninformed about the HLRF process, and those parties do not really mean to implement what they say or are they unaware of the mandate of the HLRF?

Further, they should know that the current weak and poor institutions (states, even the former 10 States) are not equipped enough to implement a Federal system immediately. Even what form of Federalism? Or just the name?  That is why the transitional period should be used to build competent institutions and personnel in the states so that they shall be able to implement whatever type of Federalism South Sudanese will adopt in the Permanent Constitution.

On the issue of allocating more powers to the states, what powers specifically? Among others, South Sudanese would like to elect their state governors, county commissioners but the power-sharing deal provides for appointments by the parties. So, elections and other related matters would need peace and discussions during the Permanent Constitution-making process.

On the issues of allocation of more resources to the lower level of government, I agree, the transitional government should observe that. I also argued in my recent article that the Agreement (proposal) should include a provision for allocation of at least 40% of national revenue to the States as opposed to the current 15% or probably less given the increment of the States. The matters should not be left vogue in the Agreement without stating the exact amount of resources to be devolved.

Thereafter, when those reforms are achieved and a Permanent Constitution is promulgated, then the country shall go for general elections, in fact, it’s first ever!

The third issue is about the root causes of the conflict. For example, SSOA said the latest proposal “failed to address the root causes and core issues that brought the country to its knees.” This gets one wondering how would they expect a discussion on Chapter One of ARCSS which is power sharing to address those issues they keep raising? The current talk was clearly about power sharing since having reached the deal on security arrangements the other week.

I have in my articles recently made some observations and recommendations on how to use the HLRF to achieve the needed radical reforms, learning from the mistakes of ARCSS. There is still a chance to address the rest of the issues, including the root causes and how JMEC should be strengthened to ensure compliance with the Agreement, during the Nairobi Talks expected to be held soon and the finalization of the Revitalized ARCSS in Addis Ababa also we expect to happen soon after. But for now please, reach a deal on power sharing and move the discussions to other important issues.

Finally, the latest proposal, in my view, is very fair on the issue of number and boundaries of states.

Article 4.13 further adds that “In the unlikely event of the IBC failing to make its recommendations before the end of the Pre-Transitional Period, the Republic of South Sudan shall have as regions the old three provinces, as per their boundaries of January 1, 1956. This solution shall be adopted on temporary basis until the number and boundaries of the States are agreed.”

The government and all parties should not be allowed to take an unfair advantage of South Sudanese by returning the Country to the old three provinces (regions).

It’s been observed that national government retains 85% of national revenue and gives only 15% to the states. This is what should be changed by giving the states more shares of the national revenue so that the whole country gets development, instead of currently where there’s hardly anything the government can show, even in the capital Juba, like clean water system, electricity or security, as their achievement for the big budget they retain.

To develop the states, and avoid a return to the old three provinces (regions), South Sudanese, the parties and all partners should work hard to make sure that the IBC does not fail to make its recommendations before the end of the Pre-Transitional Period.

Roger Alfred Yoron Modi, a South Sudanese journalist, is the former Managing Editor of Juba Monitor Newspaper and former Chief Editor of Bakhita Radio. He can be reached via his email: rogeryoron@gmail.com