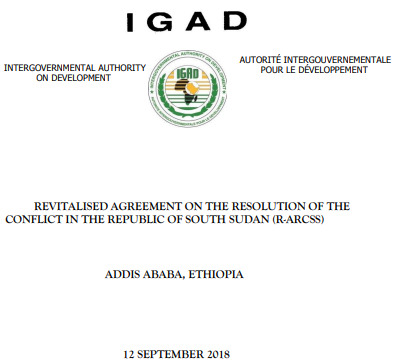 The mandate of South Sudan’s Revitalized Transitional Government of National Unity (RTGoNU), according to the revitalized peace agreement (R-ARCSS), include restoring permanent and sustainable peace, security, and stability in the country, reconstituting a competent and independent National Elections Commission (NEC) to conduct free, fair and credible elections before the end of the transitional period and ensure that the outcome reflects the will of the electorate.

As efforts and conversations continue regarding preparations for elections, implementation of the institutional and legal reforms provided for in the R-ARCSS, including the building of a unified national army, the talks with the non-signatories to the R-ARCSS, and the peace process as a whole, it is important to note that South Sudan has been in a transitional period for so long. Questions and answers regarding moving away from or extending the transitional period are also important parts of the peace process, though some are not discussing it openly.

At the recently concluded Governors Forum, RJMEC interim chairperson Maj. Gen. Charles Tai Gituai was quoted to have said, “Within the current timelines of the R-ARCSS, we have barely 15 months until the end of the Transitional Period and yet some very critical tasks remain outstanding.” He also made several recommendations to the RTGoNU on the implementation of the R-ARCSS.

In his statement to the United Nations Security Council last week, Special Representative of the Secretary-General Nicholas Haysom said “the next year presents a dramatic challenge if South Sudan is to complete its transition.”

“We expect the domestic political temperature to rise as elections draw closer. I am, therefore, deeply concerned at the restrictions on civic space, including in response to calls for non-violent demonstrations by the People’s Coalition for Civil Action,” he said.

Regarding the elections, in addition to relevant provisions such as the review of the Political Parties Act, 2012 to ensure that the Act complies with international best practices for the free and democratic registration of political parties in South Sudan and that the Act shall permit the open registration of Parties, for the benefit of the reader, here are other provisions of the R-ARCSS on the subject, despite the well-known delays in the implementation:

-The National Elections Act, 2012 shall be amended to conform to the terms of this Agreement, no later than seven (7) months after the commencement of the Transitional Period.

-No later than twelve (12) months after the commencement of the Transitional Period, the President, in consultation with the Parties to this Agreement and with the approval of the TNLA, shall reconstitute a competent and impartial National Elections Commission (NEC), to conduct elections.

-Sixty (60) days before the end of the Transitional Period, the National Elections Commission (NEC) shall organize elections in accordance with the provisions of the Permanent Constitution adopted pursuant to this Agreement and shall ensure that the outcome is broadly reflective of the will of the electorate.

-The RTGoNU shall urgently address challenges of reconstruction, repatriation, resettlement, rehabilitation, and reintegration of IDPs and returnees as critical factors affecting peacebuilding and elections.

-The reconstituted NEC, may, upon its formation, request the assistance of the United Nations and the African Union in the following areas but not limited to:

-The NEC may also request additional technical assistance from any other regional or international partners, as it deems necessary.

-The voters register shall be published within six (6) months prior to the holding of elections.

-The NEC shall invite and accredit competent and impartial national, regional and international observers to monitor the conduct of the entire electoral process in accordance with the provisions of the amended National Elections Act.

-Any dispute regarding the propriety of the conduct and results of any aspects of the elections shall be appealable in accordance with the provisions of the national elections law, and any other relevant legislation. (See Article 1.20. and sub-articles thereunder.)

Meanwhile, the Security Council has requested the UN Secretary-General to establish an integrated electoral assistance team led by the United Nations Mission in South Sudan (UNMISS), consistent with resolution 2567 (2021), to implement electoral assistance activities in support of the elections roadmap detailed in the Revitalized Agreement.

“The Security Council urges the South Sudanese authorities to make progress on key milestones that include: the necessary security arrangements; the establishment of the legal framework for elections, including the electoral system, boundary delimitation, national census, special measures for internally displaced persons, refugees, out-of-country voting, dispute resolution mechanisms, and election observation, as well as on the type and level of elections to be held; the establishment of the composition and functioning of the National Election Commission and the designation of its members, both in Juba and at the sub-national level; and the allocation of resources for the operating costs of the National Election Commission and a budget for elections operations,” the President of the Security Council said, among others, in a statement in October.

In the same statement last week, Haysom welcomed the government’s decision to re-join the Sant’Egidio process and “encourage the holdout groups, especially the National Salvation Front (NAS), to join the process without any preconditions.”

While I am not aware of NAS’ Stance on that, so far, according to The Star, “full inclusion” of Real SPLM and SSUF/A into the Ceasefire and Transitional Security Arrangements Monitoring and Verification Mechanism structures by the end of March 2022 has been agreed to, during last week's workshop convened by the Community of Sant’Egidio in cooperation with CTSAMVM and Igad.

South Sudan has been in transition for so long, and to resolve this, indeed many questions need to be asked regarding the implementation of the R-ARCSS, factors leading to group formation and cycle of transitions, as well as the peace process being pursued as a whole.

In my program The Weekly Review Making Sense of Relevant Topics and News, civil society activist and the executive director of the Foundation for Democracy and Accountable Governance (FODAG), Jame David Kolok, once responded to the question of extension with the thus: “I think the question of extending the transitional period needs to be embedded in a reason that can be convincing to the South Sudanese people.”

He added: “I think there must be evidence to suggest that if there is really an extension, which I feel is not going to be likely, then South Sudanese need to get convinced that it is something beyond the capacity of the parties and therefore it would require that extension. But the way things are moving, I think it is very clear that certain things are just deliberately delayed. I think it is too early to talk about anything regarding extension which we hope it won’t happen. We believe that within this remaining period, there should be some major steps taken, obviously because of the fact that some of these provisions within the peace agreement do not actually require even 36 months, these are things that can be decided even in a day or in a week and the implementation would be been seen to happen. That is our position and we don’t encourage any extension at all.”

I think his argument is, to a large extent, convincing, even about any possible agreement(s) that the non-signatories of the R-ARCSS may reach with the government through the Sant’Egidio process or others before the end of the transitional period.

What shall also need attention are the practical aspects of the reforms and effects on the ground of the relevant provisions of the agreement(s). That is where a focus shall be needed in determining a more reasonable timeline, weeks or months, for a complete and well-deserved transition.

Roger Alfred Yoron Modi, a South Sudanese journalist, is the author of the book Freedom of Expression and Media Laws in South Sudan.  He is also the Producer and Host of The Weekly Review: Making Sense of Relevant Topics and News. For more, keep in touch with his website rogeryoronmodi.com