Opinion: R-ARCISS: A peace that divides the signatories and non-signatories 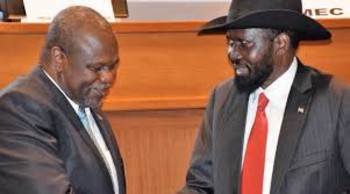 I keep wondering if peace can divide or unite the partners. I am not so young or unmindful not to have known what happened after signing of the Comprehensive Peace Agreement (CPA) or not to have read other cases of peace in the world so as to draw a comparison to the recently signed peace agreement in South Sudan duped as R-ARCISS.

After signing of the CPA, some of the Southern and Northern Parties joined the Sudan People Liberation Movement (SPLM) as opposition coalition while some of the Northern and Southern Parties joined the National Congress Party (NCP) as ruling coalition. Hold on reader, just know that my writing is not so much of the opinion leathered and loathed with any form of negative interest but just drawing the observation for future correction and reference by the analysts and opinion leaders of my kind.

To begin with, the word revitalization means rejuvenation or resuscitation of the Agreement on the Resolutions of Conflict in South Sudan (R-ARCISS) which was at death bed then as a result of the J1’s ‘‘dogs fight’’ as popularly termed by most of the analysts and political commentators. That supposedly means that the agreement that was signed would have been the best agreement capable of addressing the root causes of post-independence issues and differences which possibly were the ones that led to 2013 and repeatedly led to 2016 aggressions and subsequently the present polarization & conflicts.

Papers were still not dry of the ink when the Revitalized-Agreement on the Resolution of Conflict in South Sudan (R-ARCIS) was signed on 12th September, 2018 when several breakaways emerged from different political parties that were parts and parcels or simply the signatories to the agreement (R-ARCISS). South Sudan Opposition Alliance (SSOA) which is the major opposition coalition was the first victim of split when most of its member parties defied & refused the call from the chairperson to sign the agreement though some were at a later date ‘intimidated’ to sign. They made their position real after the final signature by its leader-Mr.Changson Chang.

Gen.Thomas Cirilo’s National Salvation Alliance (NAS) was the second opposition organization to face the drama from within its ranks when some of NAS’s high ranking officials ‘dismissed’ him as their leader though it was contained at a later date. As if it was not enough, South Sudan Patriotic Movement (SSPM) of Eng. Garang Riiny was the third movement to face the test when Gen.Ayii Ayii Akol declared the dismissal of the Chairman and Commander-in-Chief (Eng.Garang Riiny) in ‘Support’ of peace signed though it was also sorted through intervention of Gen. Agany’s father-Gen.Ayii Akol.

To follow suit, South Sudan Liberation Movement (SSLM) of Gen.Bapiny Monytuil went through the same crisis as well. SPLM-FDs’ (Former Detainees) and Dr.Lam Akol’s National Democratic Movement (NDM) are harbouring splits and also seem to be fighting the fire behind the dark corridors of their houses. To contain such discontentions, SPLM-FDs have used their recent October’s (Nairobi) meeting to put their house in order though the recent statement from their leader-Hon. Pagan Amum Okech is a proof that he was persuaded by his colleagues just to accept peace the way it is and not to his satisfaction. Furthermore, the recent resignation within the political files of National Democratic Movement (NDM) is another proof of the split on course.

For non-signatories, Gen.Malong Awan’s South Sudan United Front (SSUF) has also seen and heard two splits in the same period of peace though the impacts are minimized and considered to be of no major consent and impacts by its members.

I think the same split might be within the SPLM-IG and SPLM-IO (SPLM-In Government and SPLM-In Opposition) only that they feel being the major beneficiaries of the R-ARCISS and I believe the ceremony of the 31st October 2018 is litmus proof that the two went to bed better for this.

Digging deep into the splits: some parties split in support of peace per se while others do the same in opposition of the peace with a notion that it addresses nothing except the usual quest for power. This buys the questions: Are South Sudan and its political elites ready for peace or not? Or, does it means that the peace has not addresses the root causes of conflicts as said by some holdout parties? If so, are the parties to the agreement (SPLM-IG, SPLM-IO, SPLM-FDs and SSOA-IG) ready to bring to peace or to table the parties that are yet to support peace? If not so, are citizens ready for half meal only to see the politicians enjoying the resources the usual way while people are continuing to die?

The author can reached via: awenbol2007@yahoo.com