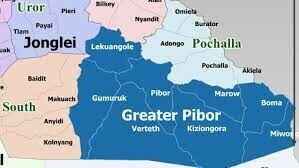 In March 2022, the Anywaa (Anyuak as other tribes called them) community of Pochalla wrote a petition to His Excellency Salva Kiir Mayardit, the President of the Republic of South Sudan, demanding exit from Greater Pibor Administrative Area. The reasons leading to such decision include, but not limited to, constant loss of innocent lives, abduction of children, cattle raiding, land grabbing/encroachment, and political marginalization perpetrated by Murle against Anywaa community. The letter was signed by traditional leaders and youth representatives. Pochalla County was part of Jonglei State before the establishment of the Greater Pibor Administrative Area (GPAA) on 14 May 2014.

The Anywaa community severed its relations with Murle and GPAA administration by declaring Pochalla independent from administration in Pibor hence rejecting commissioners appointed by the GPAA Chief Administrator. The community followed its petition with a peaceful demonstration in Pochalla in April. Anywaa Youth in Pochalla went out in large numbers to peacefully protest against the administration in Pibor. The key messages of the demonstration are, "No, no GPAA, we refuse to be united with murderers, child abductors, etc." They called on President Salva to separate Pochalla and/or its budgets from GPAA. As a matter of fact, putting peaceful Anywaa and notorious Murle communities in one administrative area is like putting sheep and wolves in one stall. After many years of suffering, the Anywaa community said enough is enough.

However, it has been four months since the Anyuak community demanded exit from GPAA and no response from the president, whatsoever. This quietness from the head of state causes more loss of innocent lives of children, women and men and exacerbates instability/insecurity in the region as GPAA leadership uses the inaudibility of the president to do whatever they want including utilizing government resources against Anywaa. In my view, this silence from President Salva may also paint a very good picture of how the government of President Salva Kiir has neglected the Anywaa community has been, even with their full loyalty to his administration.

Since the demand for exit from GPAA surfaced, the government in Pibor has been trying all means at its disposal to fit the national government against the Anyuak community. Of course, in South Sudan if you want to induce the national government into doing what you want, just say, "so and so has rebelled or is a rebel," and you will have the full backing of the government. That is exactly what GPAA leadership and other Murle elites have been doing for the last four months. Aided by self-seeking Anywaa politicians, the GPAA administration in Pibor labeled the Anywaa community as rebels with the hope to gain national government support. This strategy of labeling others as rebels has worked out to Murle and GPAA Leadership advantage in the past eight years of GPAA existence. It works very well against elements from Nuer ethnic groups who normally organize themselves to retaliate for heinous crimes committed by elements of Murle against their populations. The government in Pibor would shamelessly label them as rebels and instantly get the required support from the national government. They are now using the same strategy to fit the government against the Anywaa community. Thanks to Anywaa's good record of being a peaceful community, with no history of rebellion, and a lack of evidence to support such claims, the GPAA administration has found it harder to convince the national government to accept their lies.

Nevertheless, the government in Pibor is using and will continue to use Salva Kiir's silence to intimidate and frustrate the Anywaa community for demanding separation from GPAA. Lately, GPAA directed scathing measures on the Anywaa community. First, the salary of civil servants in Pochalla from November up to date has been eaten in Pibor. Secondly, Murle has stepped up attacks in the Anywaa area to terrorize and silence the Anywaa community. They have carried out a number of attacks against Anywaa villages in Pochalla including the palace of King Akway Akway in Otallo and across the border resulting in numerous deaths. Thirdly, the Area Commander in Raad, a high-ranking military officer from Murle, used state resources to attack Anywaae (Anyuak) who are returning to re-establish their homes in Awetaballa (Pakok) payam. Fourthly, Murle politicians and elites incited Murle youth to kill innocent Anywaae (Anyuak) in the Konyokonyo IDPs camp. Now as I write this article, the commander of Brigade 23 in Pibor, dominated by Murle, is mobilizing Murle youth to attack Pochalla using government artillery. The saddest part, however, is that the national government under President Salva Kiir remains silent and seems not to be bothered, at all, by the loss of lives of innocent Anywaa populations. No one has been held to account for the killing of Anywaa in the Konyokonyo IDPs camp despite the fact that it happened at the heart of the capital city, Juba. Hence, Kiir's lack of response to the demand of the Anywaa community has caused and will continue to cause further loss of innocent lives as long as the government in Pibor will use state resources against Anywaa populations without being held responsible.

In my opinion, President Kiir's lack of response will also paint a clear picture of how he has neglected this peaceful and loyal community to his administration. His softness may also make the Anywaa community wonder whether the President reciprocates their enduring allegiance. Anywaa community supported the liberation struggle to the core, putting in human, economic and moral support to fight the enemy. Pochalla was the springboard for the liberation of South Sudan. Like the rest of the South Sudanese, they voted overwhelmingly in favor of separation from the north and voted into power President Kiir with 99 percent of their votes. This community did not and has never fought or formed any militia against the then SPLM/SPLA or the government under President Salva Kiir. Sadly, the government seems to punish faithfulness and reward rebellion and unsavory reputation. No son/daughter of Anywaa has ever been appointed into the executive since 2005 despite having capable leaders. No Anywaa has been appointed to lead Greater Pibor Administrative Area (GPAA) since its inception. Pochalla which was the catalyst in the liberation struggle is completely neglected with no roads, schools, health facilities and clean drinking water. The begging question is, “Is this how you treat your loyal/faithful citizens?”

My appeal to Mr. President is to treat this matter with the urgency it deserves to avoid further loss of lives and to stop the government in Pibor from using state resources against the Anywaa community. The president should send a delegation to Pochalla and hear from the traditional leaders, youth, women and the entire community as to why they don't want to remain in GPAA and will have a ground to respond to such demand from an informed position.

The author is a writer and a graduate from Catholic University of South Sudan and the leader of Pochalla Anyuak community in Juba. He can be reached at mamagoro2013@gmail.com