Skip to main content
Toggle navigation
Home News Opinion: Does a threat of routine dismissal of people from their works produce positive outcomes in the battle against corruption?
By Dut Anyuan - 4 Dec 2018

Opinion: Does a threat of routine dismissal of people from their works produce positive outcomes in the battle against corruption? 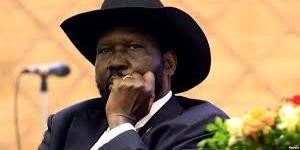 After I promised myself not to say anything regarding South Sudan’s politics. Notwithstanding, the recently made statement by President Kiir Mayardit under an expression of "I did not get people who can work, I got people who know how to eat,” had indeed shed the light on a really good personality of President Kiir in dealing with the country’s affairs.

As the result, I decided my comeback. Simply because I do respectfully feel sorry for President Kiir regarding the above phrase and I certainly envied him as if I were in his circumstances or shoes, I would have applied different strategies of dealing with the working people alleged of corruption in the public sectors to bring an end to the corruption's dominant in whatsoever costs it may take in this country. It is simply because the corruption by which President Kiir is reluctant to tackle, it indirectly reflects the misuse of entrusted authority given to him as the head of state and so making President Kiir as an absolute right person to stop the individuals who use the public sectors for a private acquisition to satisfy their needs.

The corruption has its classification such as grand, petty and political and truly, it depends entirely on the sums of money, or valuable material lost and the areas where it takes place. Accordingly, as this would be nice to quote his beautiful words as follows: “This department that you are going to take is a very rich department that if the money that comes from it is received and kept well, and deposited to the government account, nobody in this country would stay without salary”. Just to help you understand this, President Kiir simply was referring to the customs service of a country which is extremely the vital sector in every country’s economic life. So, the fact of this statement is undisputable and thus, I have fully given my consent to the statement made. It is an extremely necessary sector which every government at the first concern should put all that it takes to improve its transparency. Meaning that this sector’s business activities should have been made in an open manner and with no secrets in order to boost the trust of the people in its fairness and honesty. Being that the case, corruption is an abuse of power which is punishable by law and thus, its commission should not be or deserve not to be handled verbally as the above statement indicated. Allowing corruption to take place, does not show anything other than allowing your good personality to be tarnished by those criminals who practice corruption. There is a need to be watchful and be vigilance as this practice will make you always an indefensible in the public eyes, no matter how many people aware of the good characteristic and kindness of your heart.

Mr. President, it is really important to get rid of this epidemic, because it has decomposed, destroyed the fabric of our society as you can witness it yourself. It does demoralize the trust of people in your leadership as well as it weakens the economic capability of our nation and so now every institution of the country is being put in the weakest position through this deadly practice. It has cost us the loss of true freedom we should deserve to have, it hindered the development of our health sector, it killed our education sector’s development as this is proven by looking at many medical students who have no back supports from your government have never moved in inches from classes for more than three years now (go and ask the medical students in the country for instance, of how far they have gone since their enrollment in their classes after independence of the country to prove me otherwise). It also has weakened the power of our money and so resulted in the death of many lives inadvertently.

Mr. president anyone that looks at this quote below, it may simply come into a conclusion that you know exactly what is happening as this quote tells all “But because everyone takes and puts [the money] in his pocket, that’s why we have the crisis”. Candidly, I thank you and appreciated the move you are taking, however; pursuing the existing policies of how to challenge and tackle corruption is in need of a change with different tools or strategies that can bring an effective end to corruption. President Kiir if these words as I quoted hereby, indeed are yours "You were recommended to this position. I will give you a very specific time to see your performance, if you go according to what we want you to do, yes you will do business with us, but if go opposite, you will be out,” Then this statement upholds my position of a need to change the tools applied to unravel the corruption in the country as well as the sector in which you have spoken about. The corruption is everywhere in the country, not just the area you have mentioned and if all public sectors are being run thoroughly in accordance with the rule of law, they will benefit all materially as you mentioned and plus more common good to come.

If I were you, Mr president, but unfortunately, I am not you, I would have told the appointee that as you are appointed to this position in this a critical time, in which I have reversed the policies of expelling those people who committed corruption from their jobs to their homes. I am sorry for appointing you at this critical time, but I have appointed you because I trusted that you will deliver what needs to be done at this critical time. Indeed, it is not intended toward you, but I have come to the conclusion to put every corrupt person in the jails and I had fully promised myself and all my colleagues in the government that I have refrained myself from sending home or laying-off those committed the corruption. So now and then the law will take its course without discrimination to put any corrupt person in the jail. By saying that, this would have been received well with a clear understanding of a game-changing. Thus, it will send out a very powerful message to those who abuse our public sectors. Mr President pledging to me that you will be expelling me from my job after I have stolen the public money will never stop me from stealing. I work because I need money and if there is a shortcut without accountability then why should fear and from who should I fear? Make the laws talk to the people to ease your burdens. Therefore, expelling people from their jobs do not prove anything rather than its ineffectiveness and hence, it is no deterrent at all. So, please change the way you deal with the people you employ to restore the lost spirit

The author, Dut Anyuan, is the graduate of LLB Law and currently a master student of law and Finance in UK, University of Leeds. He is reachable through email: dutanyuon@gmail.com