Opinion: Betting against peace in South Sudan: A part of regional design? 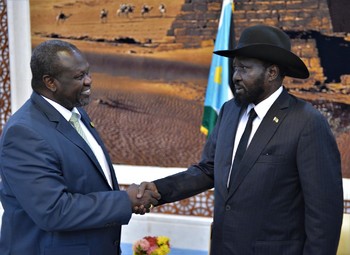 As South Sudan parties celebrate the return to peace and deliver it to their countrymen, who desperately need to enjoy peace to plan their lives, engage in agriculture, business and other productive activities, dark forces inside and beyond our borders are already hedging to torpedo the peace and promptly return the country to war. It's fair to argue that the most dangerous third parties to South Sudan, at this critical point, may not be those interested in securing their economic and security interests (such as Sudan, Kenya, Uganda, and Ethiopia), but those seeking to perpetuate their designs for the region as whole. South Sudan is a small part of a bigger play for the strategically positioned region of the Horn of Africa and provides a penetration point for the designs in the wider regions of East and Central Africa.

South Sudan may have been a small part to a much grandeur design for the Horn of African region. The Horn of Africa region, due to its proximity to the Middle East, and the all-important Red Sea corridor, where a significant portion of the world trade flows, remains a critical piece in geopolitical contest for the world's superpowers such as the US, Russia and China and a coterie of their allies. It's therefore reasonable to deduce that there's a program underway to push out leaders that don't fit nicely into the democratic narrative, and to make way for a more malleable new generation of leaders that will accommodate, without pushback, the outside designs for the region.

Let's review some salient examples of this process at work: Uganda's Bobi Wine, who's being utilized to put pressure on president Museveni, has already been launched, and who knows what's in store for Rwanda beyond used clothes standoff with the U.S. Back to the point, these third parties, that want to put their interests before the interests of South Sudanese, believe the peace will not work because they think the leaders are not capable of sustaining peace. And boy they have their South Sudanese singers to play the chorus. We have South Sudanese outside the country playing up the idea that the peace agreement will not hold due to this fixation that the leaders don't have the capacity to allow their countrymen to enjoy peace.

These are the leaders who gave the ultimate sacrifice fighting a superior enemy and won. The doubting Thomases should watch Youtube videos of the SPLA commanders leading the war effort to liberate South Sudan. They paid in blood, flesh, and bone and it's not in their DNA to deliver the South Sudan only to engage in its destruction. At the end of the day, political differences are a fact of life in a functioning democracy, but no leader wakes up each morning thinking of ways to destroy a country. This narrative to paint South Sudan's leaders in such negative light is only intended to promote the designs of the outsiders. While we were in refugee camps sleeping soundly enjoying meals, and education, the current leaders of the country were risking lives and limbs for our freedom. Many of them had the option of throwing in the towel and leaving the battlefield, but they opted to stay put until the job is done. In the end, their sacrifice gave us the freedom that we are quick to forget, and yet enjoy without thinking like air we breathe.

There's a far more nefarious explanation for ominous predictions that recently signed agreement is a dead man walking: these third parties want to see an implementation that follows their wishes and desires. If the implementation deviates from the desired paths, they will shift into high gear to incentivize persuadable opposition figures to be obstructionists, thus causing the government to take actions that may result in the collapse of the agreement. South Sudanese will have a challenging transitional period where they must choose between putting their own interests above all else or allow forces outside our geographical space to influence the direction of our country. It's not difficult to imagine how the ill-wishers will try to undermine the recently signed peace agreement. They are already casting doubts as to whether it will hold; propositioning their own timetable as to how their version of 'credible implementation' is supposed to take shape. Unfortunately, some so-called South Sudanese intellectuals are being utilized as microphone to dispense the negative message that the peace is a nothing but a strategic arrangement among the elites who want to perpetuate the splundering of South Sudan's wealth.

The South Sudanese, collectively, didn't choose to suffer for over fifty years just to end up a pawn of any power in a geopolitical games and contests. South Sudanese, collectively, share a geographical space on planet earth, and they have a shared duty to protect this shared manifest destiny. There's no other sweetest piece of earth than the one majority of our people call home. We can experience and enjoy alien geographical spaces, but none is sweeter than South Sudan dissected by the River Nile. That's why this is a pivotable moment in South Sudan's progression. Do our leaders choose to be beholden to outside forces that care more about how they (our wayward leaders) meet the furtherance of the alien's forces own interests, or do we choose to be independent, and do right by our country. This is the challenge of an undefined time horizon.

It's a reassuring solace that South Sudanese have a reservoir of experience for coming together to collectively confront outside forces that intend to harm our country. The author is not a historian, but we have prevailed in the past, measured by our continued existence as a geographical entity, against outside forces that intended to imposed negative actions against our geographic space and people. We have South Sudan.

The main theme of this article is that South Sudanese leaders, be they opposition, or proper leaders of the country should be cognizant that there's a decision to be made: Do we allow South Sudan to be hijacked by outside forces that only care about their own interests and designs, or do we ignore outside forces and make it work for our people. It may take time for us to achieve perfect democratic and institutional performance, but that if there is measurable progress, we should continue to maintain the momentum.

The outside forces, still hand-holding wayward opposition figures, whisper into their ears: institutional reforms, justice, accountability, corruption, and other sideshows aimed at getting South Sudan to be lost in the morning mist and chasing its tail. Granted, these are issues that ought to be examined and achieved but over time. You cannot save a house from burning down by asking who set fire, when you are perfectly equipped to immediately extinguish the raging fire. Which country on earth has not undergone phases of institutional development? When you read about America's civil war and numerous wars that took place in England and Europe, one can't help concluding that South Sudan's conflict is a mild brotherly fight that pales in comparison. South Sudanese should be proud that we have recognized our differences and accept to change them as time progresses.

Outside forces are only interested in furthering their own interests and tend to be impatient. The outside forces are on a timetable and have reports to make to their superiors. South Sudanese have a country to build to be a productive part of human progress. Why should the direction of South Sudan be determined by outsiders? It does not bode well for our desire to be independent, and intelligent enough to define our future. Betting against South Sudan's peace agreement is the bottom. The people of South Sudan deserve peace. South Sudanese must remember that those who express strong reservation about the recently signed peace are those outside who have not experienced the harm this brotherly fight has imposed on South Sudan. It should be the objective to prove these negative voices wrong.

The author is a South Sudanese in living in Germany. He can be reached at jwerkok@gmail.com.