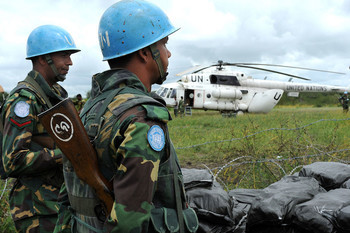 More than 60 former employees of PANCROP company, a contractor of the UNMISS continued to block the main entrance of the UN compound in Bor Town of Jonglei state since last Wednesday demanding better remuneration conditions.

Isidore Boutchue told Radio Tamazuj on Monday that the striking former employees have brought the mission’s operations to a near standstill.

“Our operations are really affected. Since last week, some flights could not operate. Even today, we could not supply water to the IDPs. Water tanks are inside here inside and people are suffering,” he said.

The protesters say they will block the UNMISS gates until their demands which include reinstatement and better treatment are met.

“Our problem started after we demanded a contract in July. We had already worked for 3 months so on 7th July we rejected the extension of our work without a contract. This angered the company and it dismissed 62 of us the following day,” said Malueth Makoy.

“We go for maternity leave without pay. If someone is on sick leave, there is no pay for the leave days. After we demanded an improvement, we were not allowed to work again,” lamented Nyandeng Garang.

“We want contracts with all rights and privileges as per the laws of this country. We were dismissed without reason in July. So, all 62 of us, not 31 must be reinstated. Otherwise, we will continue blocking the UN gate,” said another protestor who only identified herself as Nyatibo.

For his part, Pierre Colomb, the company’s operation manager, said the protesters were offered contracts but refused to resume work.

“They are not willing to come. They want to collect money for two months that they were at home during the strike. They want us to chase people working inside. So, now, it is up to them, not us,” he said.

The UN official Boutchue, however, said they will peacefully engage the striking group so that a settlement is found to quell the tension.

PANCROP is contracted by UNMISS to provide among other services, waste management, gardening, cleaning, laundry, and chemical spraying.