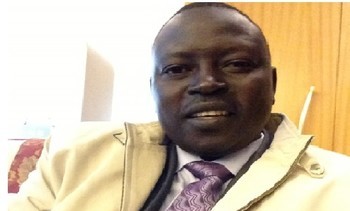 Your Excellency, I hope this letter finds you well. While submitting this appeal to you, Mr. President, I am not in any way claiming superior abilities and wisdom than you might have acquired. But I want to state that the entire country depends on you for a right decision against promoters of the graft. Continual inaction is worsening already awful situation your fellow citizens face and may only end in more pains, regrets, and wishes, which cannot help remedy consequential evil that marring our history or losses likely to result.

Mr. President, the Government of South Sudan secured over USD 130 million loan from a company (name withheld).  According to a report on your Desk, USD 50 million has been stolen and shared by senior government officials.  Up to now, you are yet to act on the report and this is worrying. I am alarmed, I guess you are, to learn of the disappearance of USD 50 million in the hands of officials in your administration - whom I least expected to help themselves with public funds without any lawful authorisations.

While securing loans for alleviating human sufferings in our country is noble, it is unfortunate that individuals you delegated have guts to negotiate their personal interests into loans and illegally benefited from the loans whose obligations to repay rests on the entire nation. You may recall that since 2012, South Sudanese have not been benefiting from the loans secured from the overseas. For example, loans obtained from Qatar in 2014/2015 to the recent loan of which USD 50 million dollars is now syphoned off public account have always been enriching senior officials in your government and not the nation.

These happened against the backdrop of your pronounced zero tolerance to corruption in your government. The axis of a graft is largely spinning within the executive under you, Mr. President and you may need to wake. Massive corruption is denying the current generation of much-needed services as well leaves the next generation highly indebted and enslaved to foreign debtors.  Such behaviours are affronts to the wellbeing of the nation and ought to be stopped and punished by none other than you.

It is very painful knowing that every South Sudanese child born today owes foreign debtors thousands of United States Dollars – an amount a child never benefited from even by a cent! With the current direction the country is taking, a would-be child of a child born today would approximately pay more money in accumulated loans’ interests. What future is your administration giving your children and your children children, sir?

Although it is crucial at this juncture to shame the government officials involved in the embezzlement and fraud, I would not be generous as to provide to the public the names of senior government officials already on your desk (I would if need be). However, I would like to emphasize that South Sudanese need justice. The information on your desk bearing a name of a senior official at the presidency, another senior official in Ministry of Foreign Affairs, and two other senior officials in Petroleum Ministry could set precedence on your intention against the fraudulent behaviours.

I believe you might be distressed by the betrayal of the people you most trusted. Well, the same feeling is the case with the people of South Sudan who trusted you and now feel you betrayed them, especially when you take no action against rifting off the public or robbing public of much-needed resources. This case should not be swept under a carpet, Mr. President - considering the needs for the country to provide services and revive the economy.

Mr. President, I am not more qualified than you to remind of the fundamentals of the liberation struggle. Which include aspirations and hopes for a nation where no one is Above the Law irrespective of the status of a suspect; and the creation of opportunities for all to prosper. I am convinced that the above principles are reasons, which appealed to your decision to volunteer your energy and time to fight or die fighting for them. Perhaps, God spared your life for so you help the nation realize the dream that took more than 2.5 South Sudanese lives. It would be very unfortunate if you chose to nap on the wheel.

It disgraces a nation that government officials, with no known prove of independent sources of income, accumulate sums of money and subsequently get richer than the nation they represent. And much more devastating when a liberator leading such a nation allows for it. Mr President, none of your executive has substantial evident justifying their accumulated wealth other than glaring syphons of public funds.

Your hands might be clean in this particular case. I am also aware that all the pieces of evidence proving the allegations that the suspects actually took for themselves unauthorized public money are on your desk. Thus, the decision lies in your hands to initiate accountability. Mr. President, the public is running out of patience with government officials’ behaviours and your inaction indirectly lubricating impunity in the administration.

You stand a chance to redeem your good name if you take actions against kleptocrats in your government. Still, there is much to lose if you chose not to take any action.

Perhaps, I can’t help, but imagine perpetrators would use ill-gotten money to sway public opinion in their favours. But I am also reminded of citizens’ frustration (myself included) on your administration that could rightly fall on the kleptocrats within your government if you take genuine steps toward lifting the protective veil on the graft promoters.

Mr. President, the public is running out of patience with senior officials’ behaviours and your inaction indirectly lubricating impunity in the executive branch.

I beg for your indulgence for I intend to be brutally candid here, Mr. President. Your cards are getting exhausted if any remains. More so, the interest of our country requires you to take a bold decision. Perhaps, the application of existing laws to tackle the kleptocracy can redeem the country. You can save our country by initiating accountability, Mr. President. If you can’t fight corruption with all the constitutional powers vested in and the system, you may as well quit and someone else can do it and shall be at your own risks!!

The author, Wol Deng Atak, is reachable via email:  wolatak@gmail.com